Memories of the 1970s were evoked as the price of Brent crude oil temporarily climbed above $139 a barrel in the wake of Russia’s invasion of Ukraine. That was a period when very high oil prices and elevated rates of consumer inflation plunged some of the world’s major economies into recession.

Using the definition of recessions from the National Bureau of Economic Research (NBER), there have been seven such downturns in the US since the 1970s.

The first four were all preceded by a pick-up in inflation and interest rates (see chart, below). The decision by the US Federal Reserve (Fed) to raise interest rates amid signs of inflationary pressures broadening out in the US – as they did in the 1970s – has further put parallels with the past back into focus. 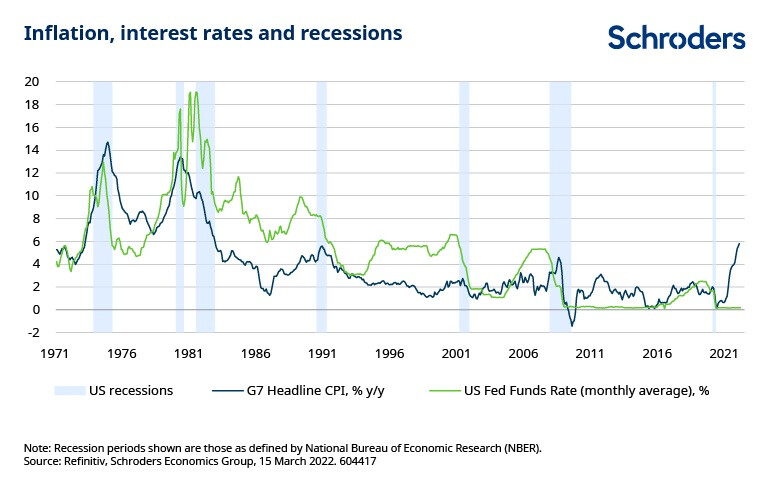 Around $2 trillion of savings each in US and Europe

Could this “economic cycle” play out like those from the 1970s, 80s and 90s, when economic conditions were seemingly more akin than to those seen over the past two decades? The economic cycle, which is sometimes referred as the business cycle, is the period in which an economy moves from a state of expansion to one of contraction, before expanding again.

Certainly, recessions before the noughties followed the Fed raising its base borrowing costs, or the Fed Funds Rate to cool economic activity and bring inflation down. This time, however, economists are looking for consumer spending to hold up.

They expect this resilience as people run down savings accumulated during the Covid-19 pandemic, despite the tightening of monetary conditions - in addition to raising interest rates, central banks are adjusting other monetary polices such as quantitative easing (QE).

QE involves injecting money directly into the financial system by way of asset purchases (buying mainly bonds) to support activity since the global financial crisis. These unconventional policies were again deployed in response to the pandemic fall-out.

Keith Wade, Schroders’ chief economist, says: “Households still have considerable firepower, and the consumer is likely to be the mainstay of economic growth in 2022.

“They have a cushion to absorb the impact of higher energy costs with the excess savings built up during the pandemic, which we estimate at around $2 trillion in the US and a similar figure in Europe.”

Russia’s shocking invasion of Ukraine – with the consequent impact on energy and food prices already seen – has certainly added a new dimension to the inflation picture.

Schroders now expect global consumer price inflation of 4.7% this year (up from 3.8%) as the impact of the war reverberates around global markets, although there remains a high level of uncertainty around the economic implications of the conflict. These are forecasts for consumer inflation as based on year-on-year (y/y) movements in consumer price indices (CPI).

Inflationary pressures, however, had already been building following the marked global economic recovery as Covid-19 induced restrictions were gradually eased. The easing had resulted in shortages of materials, energy and transport. This was coupled with very strong demand, especially for goods given restrictions around services sectors.

The pressure in global supply chains has resulted in sharply rising costs for producers of goods, who’ve in turn raised prices for the consumers of their end products. Even before Russia’s invasion of Ukraine, CPI inflation had been at its most elevated level for decades in the US, Europe and the UK.

Wade says: “We are optimistic on supply chains gradually returning to normal in 2022 and can see scope for a moderation in commodity prices should the situation in Ukraine stabilise.”

As inflationary pressures ease, Wade expects global CPI y/y inflation to fall back sharply to 2.8% in 2023, up only marginally from 2.7% forecast before the Ukraine invasion.

That said, the broadening of inflationary pressures seen in some major economies, and notably the US, is a concern, especially if they result in a “wage-price spiral”, where expectations of inflation become a self-fulfilling prophesy.

“Initially the rise in inflation in 2021 was led by the re-opening sectors such as airlines, hotels and restaurants, however more recently we have seen a pick-up in the cyclical areas such as housing in the US where shelter prices have accelerated sharply,” explains Wade.

“Overall, 80% of the US CPI basket components are now rising at over 4% y/y. This suggests it is not just one-off supply bottlenecks which are driving the acceleration in inflation with cyclical prices also reflecting excess demand.

“The broadening of inflation into the cyclical areas of the US economy is a concern as trends in this area can persist and may feed a wage-price spiral.”

The fear of wage-price spirals is seen as a further justification for parallels with the inflation experience of the 1970s. This was a period when oil prices were very volatile (initially due to an embargo by oil-producing nations following the Yom Kippur war and latterly as a result of the revolution in Iran) for an extended period and wages were rising in the West.

“Stagflation”, a combination of slowing growth and accelerating inflation, turned into outright contraction and recession for many of these economies as a result.

Risk of recession has gone up

Covid-19 induced supply chain disruptions had already set the global economy on a stagflationary course prior to Russia’s invasions of Ukraine. The war has amplified these trends.

Alongside the increase to its inflation forecasts, Schroders has cut its expectation for global growth for 2022 (to 3.7%, from 4.0% previously) and sees risks now of growth slowing further and inflation remaining higher for longer. Again, there remains a high level of uncertainty around these forecasts as the economic implications of the Ukraine invasion become clearer.

Wage-price spirals, or an escalation of the Ukraine crisis are some of the key dangers in this regard.

Wade comments: “We have a risk scenario where Russia continues to occupy Ukraine and turns its attention to its new neighbours prompting tensions with Eastern Europe (Poland, Romania, Hungary, Slovakia) and the Baltic states.

“The rise in commodity prices drives inflation even higher putting a major squeeze on consumers and business. Economic activity slows significantly. The result is an even more stagflationary outcome with global growth weaker and inflation higher this year and next.”

There are also other risks, for example recession in today’s world, believes Wade, could result from a collapse in consumer spending due to other factors: “There are two risks to this view. The first is simply that bottlenecks prevent spending from taking place.

“Big ticket items such as cars are in short supply and travel is still restricted in many regions, particularly Asia. This could create another air pocket for the economy where activity dips until supply can respond.

“The second is that people choose not to spend their savings after all.”

For now, however, the pandemic savings look to be a key difference with past economic cycles where higher inflation and aggressive tightening in monetary policy triggered a consumer collapse and recession. Economists are expecting consumers to be a mainstay for the global economy as they run down savings, as the world continues to re-open.

You can listen to an extended chat with Keith on the Investor Downlod podcast by clicking the play button at the top of the screen.

You can subscribe and listen to the Investor Download wherever you get your podcasts. New shows drop every Thursday at 1700 BST.