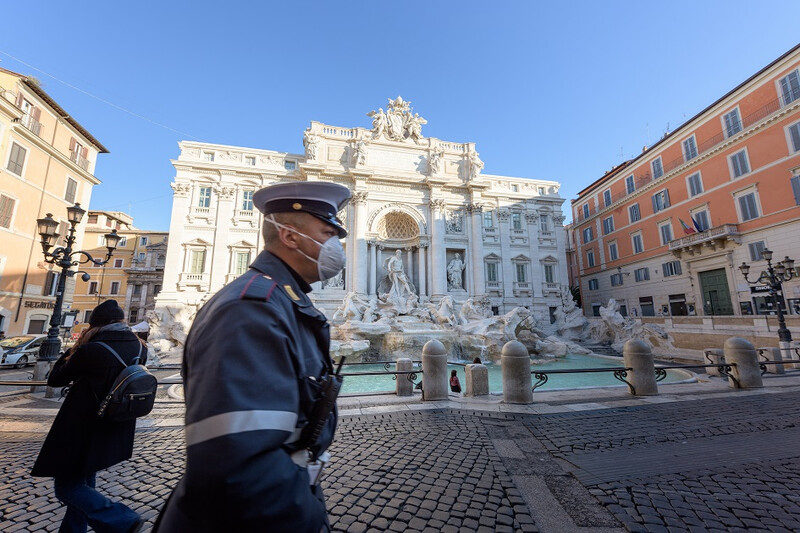 This is going to be the deepest recession for the eurozone economy in modern times.

Just as Italy has been one of the hardest hit nations in the Covid-19 crisis, there are fears that its economy and public finances could also be among the most vulnerable – and even that it could leave the eurozone.

It’s the third largest member state of the EU and one of the most heavily indebted. So it went into the coronavirus crisis in a vulnerable position.

What problems is Italy facing?

Along with Spain and Greece, it is already finding it more expensive to borrow. “That, of course, is reflecting the higher degree of credit risk attached to these bonds going forward,” says Azad.

Azad says that while this year Italy’s budget deficit will probably rise to more than 10% of GDP, there will be support on offer.

What support will Italy be offered?

“The European Union have provided a three-pronged approach to helping member states out and with that around 2-3% of GDP worth of funding could be made available to Italy from the outset.

“At the same time the European Central Bank has extended and expanded many of its asset purchases programmes.”

This is what is commonly referred to as quantitative easing. It is aimed at providing liquidity for the government bond markets and keeping the financial system moving.

How will Italy fare in the longer term?

The first risk is the withdrawal of support, once the Covid-19 crisis is over. How will Italy cope then with an even higher debt burden?

“When and if the ECB decide to scale back their quantitative easing programme, that support will be removed.

“Also, some of the loans that are being offered from the European Union are really only for this year and are supposed to be targeted at the furloughing of workers [and] healthcare costs,” he adds.

The second big risk is that Italy doesn’t grow very much.

“It hasn’t done so really since the Global Financial Crisis, averaging around 1% in nominal terms since then. In fact it’s grown at less than half of the average growth rate for the eurozone overall for that period.

“So as a result it has had a very difficult time getting a grip of its public finances and getting debt under control.”

Azad adds that if things don’t improve then Italy’s growth problem will only get worse because its working population is ageing and shrinking. “So the long-run dynamics for paying for this debt, just servicing the debt, is going to be very difficult,” Azad concludes.

But I thought it was Greece with all the problems?

When the sovereign debt crisis was unfolding, Greece, Ireland and Portugal sought bailouts from the European Union and the International Monetary Fund. But these nations are small and relatively easy to bail out.

“Italy today is almost three times as large as these countries put together, so it’s just not plausible to come up with enough capital to bail Italy out for a long period of time if they get shut out from bond markets.”

Also, Italian politics is toxic, Azad says: “We’ve had populist parties really take control of both the government and the opposition.

“Italy argues that the coronavirus is not their fault. They shouldn’t be stigmatised for taking aid from the European Union. But at the same time, the creditor countries still need to see some way that this doesn’t become just a cash grant with no change in behaviours going forward.”

Sounds tricky, what on earth is going to happen?

There are various EU monetary support options – namely the Outright Monetary Transactions and a bail out from the European Stability Mechanism – but there are conditions attached including defaulting on some of the debt. And Azad says that Italy does not seem to want to go down this road as it will be unpopular with domestic savers.

"Even if it did there’s no guarantee that it will change the long-term dynamics for its public finances. At the end of the day its growth situation will continue to worsen and therefore any bailout that they receive probably won’t help for very long.”

What do other EU member states think?

“The trouble is trust,” says Azad. “There’s just a lack of it at the moment. Can you really trust this government or the future governments in Italy to adhere to the rules, to do the right things, to reform their public finances and their economy to make sure that their finances are under control?

“That’s a very big question and a tough one to answer for many member states. Germany is clearly reluctant to offer grants at this stage. It wants to make sure that it has some power over the money by offering loans.

“But at the end of the day, what we’ve seen in the past is loans end up becoming very long-term loans. They end up being set at almost zero interest rates and in that respect they may as well be called grants at that point.”

Is there a danger of Italy leaving the euro?

Many investors think Italy could solve some of its problems by exiting the eurozone.

Then it could, “…[D]evalue its currency, default on the euro-denominated debt that’s there, convert what domestic debt is held into the new lira and move forward from there,” says Azad.

This would be an entirely political decision.

Azad says that, “it’s worth noting that in the past when the two political parties have discussed this openly they have backed away from euro exit notions very quickly after suffering in elections”.

“So it’s certainly not a given that Italy will leave the eurozone, but we do think there is a very high chance that they experience a debt crisis within the next two to three years, and that the fear of leaving the eurozone will be in the minds of many investors out there.”