Why we're at a tipping point for clean energy

Renewable energy has been around for a while but there are now three drivers working together to speed up the transition away from fossil fuels.

Alternative energy sources to fossil fuels have been around for many years. Wind, solar and tidal power have all been harnessed to a greater or lesser extent by numerous countries around the world. But we think that the transition to renewable energy is set to pick up speed rapidly and there are three reasons why.

Firstly, this simply has to happen. Climate change cannot be ignored and the political will is finally there to confront the challenge. Secondly, renewables are now competitive with fossil fuels in terms of cost. And thirdly, consumers are demanding that this happen, and are voting with their feet as demand for electric vehicles (EVs), for example, soars.

Climate change has shot up the news agenda this year as both environmental activists and extreme weather claim public attention. There is increasing acceptance that climate change is an urgent problem that we need to address now, not at some distant date in the future.

We have seen a transformation in the past couple of years at the policy level. Critically important among this is the Paris agreement to reduce emissions in order to limit global temperature rises to 2°C above pre-industrial levels. There is buy-in globally with politicians setting hard targets.

For example, the UK prime minister recently announced a target of zero carbon emissions by 2050 and China is aiming for 35% of energy to be produced from renewable sources by 2030.

Currently, renewables account for around 20% of the global energy mix. This needs to rise to 85% to meet these globally agreed climate goals and we are not currently on track, with global emissions rising in 2018.

Even taking into account the current climate policies and pledges, the world is still on course to warm by around 3°C, as the chart below shows. 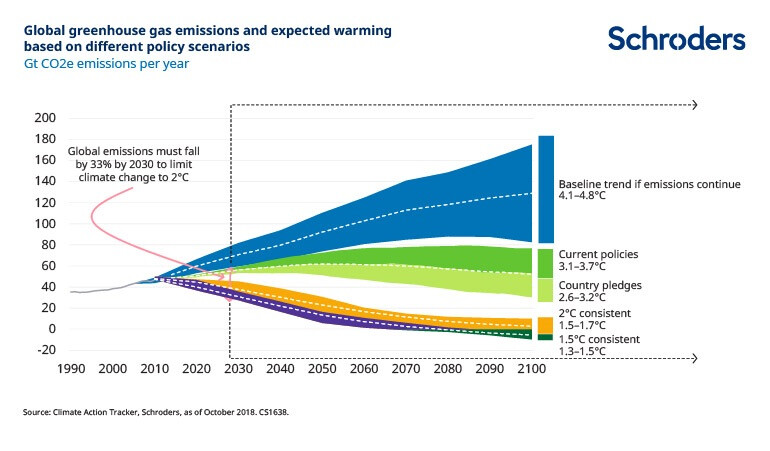 This means we need to see a huge acceleration in the implementation of policies to reduce emissions and make the transition to renewables.

The good news is that renewable sources of energy have now reached all-in cost parity with fossil fuels. Specifically, as the chart below shows, solar and onshore wind energy are competitive with oil & gas. What this means is that renewable energy isn’t any longer simply a matter of being the right choice for the environment; it’s also the sensible economic choice.

Renewables are now the clear choice for governments looking to build new energy capacity to meet the needs of a growing population, for example. Utility firms are increasingly choosing to add to renewables because that is the cheapest option for them and their customers. Corporates such as Google, who need huge amounts of power for their data centres, are requesting renewable energy because it’s the cheapest and most reliable source. 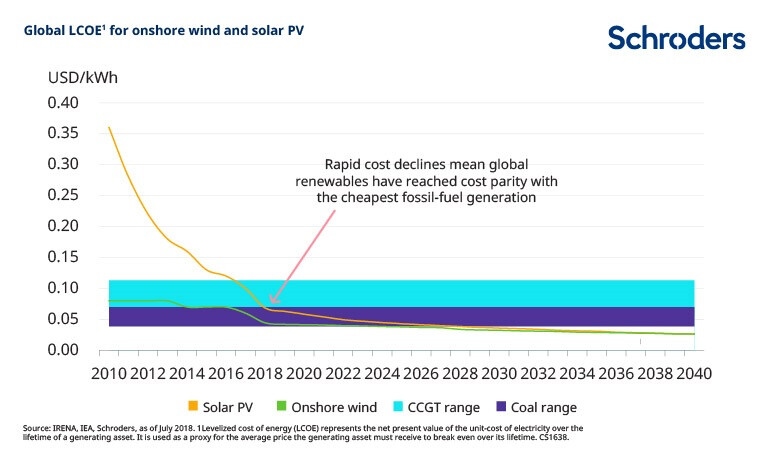 The third factor driving this change is that consumers are demanding it. Electric vehicles, for example, have seen a significant jump in sales in the past couple of years. This is only set to accelerate at a faster pace as governments set deadlines for the phasing out of internal combustion engine cars – many of these deadlines are just ten years away.

What is more, the average electric vehicle uses as much electricity in a year as a typical house. As more consumers make the switch, the amount of electricity that has to be produced renewably, stored and transmitted will need to rise dramatically and quickly. 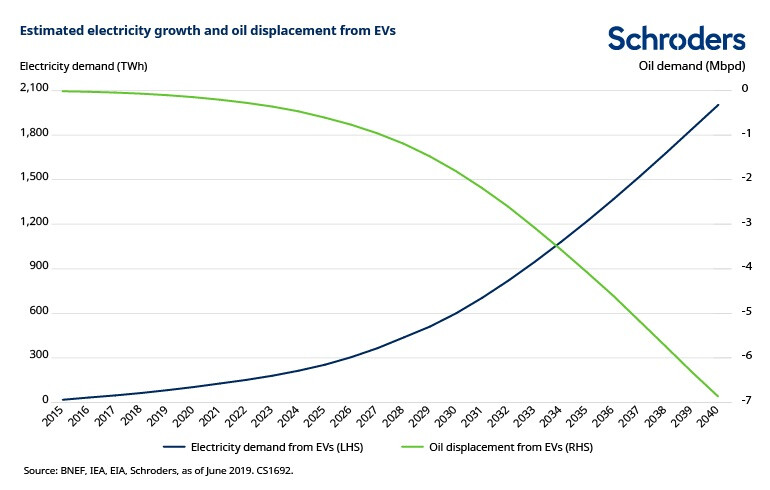 Of course, renewables have been around for a while, but they have either lacked government support, or proved too expensive, or consumer demand hasn’t been there. That these three factors are now coming together at the same time is what creates the current tipping point for the energy transition.

In turn, this creates a very powerful investment opportunity. Companies can be confident of investing in renewable energy because they now have the scope to make a good return on that investment.

The opportunity is not only in renewable energy generation, but the related industries of storing power, transmitting it to customers, building new infrastructure such as EV charging points, and designing smart meters. The next 20 years are likely to see a sea change in all of these industries and that is why we as investors view this as a hugely exciting investment opportunity right now.