Culture is a slippery concept. We all know it matters, but that’s where agreement ends. Culture is considered to be an informal institution within an organisation: it’s the values and norms that guide behaviour outside of what is covered by explicit rules or policies. It provides intrinsic motivation for actions beyond the prospects for reward or punishment. It’s the spirit rather than the letter of the law.

Why does corporate culture matter?

A business’s culture influences its ability to innovate and adapt in response to unforeseen problems and challenges. It determines openness to dissent and debate which can reduce the risk of fraud and “cover-ups”.

For example, companies such as Barings, the former UK investment bank, operated a culture where mistakes were not tolerated. So rather than reporting his mistake upfront, 28-year-old trader Nick Leeson tried to make back the money he’d lost in unauthorised trades and eventually drove the company to its infamous 1995 collapse.

How do you assess the effectiveness of corporate culture?

A company’s articulation of its culture should be read more as goals – or as advertising – than indicative of reality. The challenge is figuring out whether they “walk the talk”. An MIT study finds that 80% of large companies publish their corporate values on their website, but there is a negligible or even negative correlation between official statements and employee views.

When it comes to employee reviews, review website Glassdoor is the most popular source of data given its breadth: 70 million reviews for over 1 million employers around the world. Glassdoor has its shortcomings, but it does benefit from policies and standards that have been shown to reduce the polarisation of results and try to prevent companies from cheating.

Job review sites are one of many “go to” sources when analysing company culture and we have undertaken numerous engagements based on employee comments we have found on Glassdoor.

The Culture500 is a tool developed by MIT that uses Glassdoor to profile US companies. It covers companies that collectively employ over 30 million people, over one-quarter of private sector employees in the US. For each company, it scrapes reviews for the nine most frequently cited values and ranks these by frequency (the percentage of reviews that mention the value) and sentiment (whether it is discussed in positive or negative terms). We can compare this with official corporate statements to get a high-level idea of the internal culture of a company.

For example, the chart below shows the mapping for Amazon. It will surprise few people to see that the company is highly regarded for innovation, but criticised for a lack of respect. This is consistent with what we hear from the media and whistle-blowers about treatment of warehouse workers. 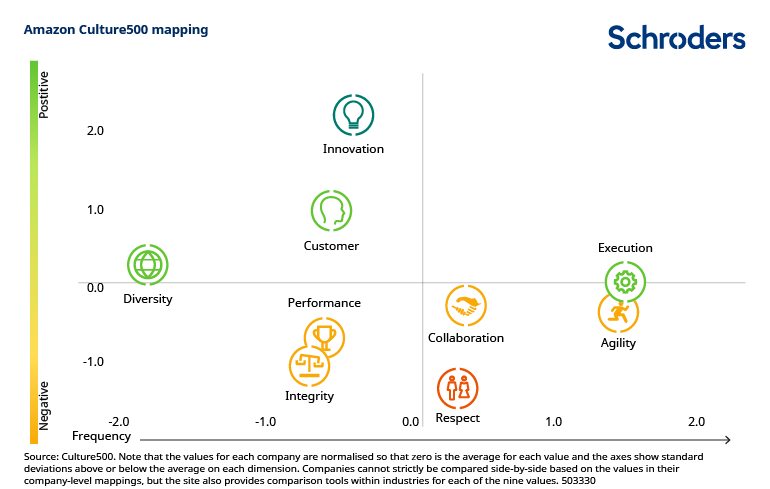 For Alphabet (below), we can see that positive comments on innovation are offset by surprisingly negative mentions of agility. In general, values such as respect, diversity and collaboration are more highly ranked than at Amazon, providing some reassurance given historic employee unrest over discrimination. Interestingly, the entire big tech sector is less likely than any other industry to have integrity in its values. 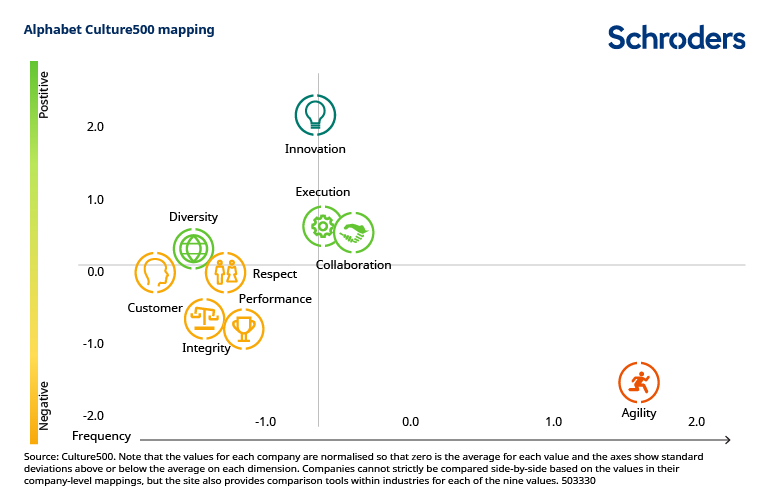 What about companies without a meaningful presence on any of these sites? An alternative approach is to try and deduce something about corporate culture from more measurable outcomes, for example, employee turnover. If staff are loyal to an institution and stay for a long time, it suggests they’re doing something right.

Diversity (of all sorts) throughout an organisation can also be a reasonable indicator that a company has a culture of respect and collaboration.

How can investors influence culture?

Culture cannot be installed from the outside. Even if investors could influence it, it is not clear that we should try to. There may be more of a role for investors to engage where there are glaring problems. In these cases, we can initiate a conversation with the management team and potentially push for new leadership or changes in incentive structures to try and establish a fertile environment for cultural change. For example, we have engaged with financial institutions in our portfolio to ensure sales staff are not compensated primarily on quantitative targets which could encourage excessive risk-taking or fraudulent activity.

However, in some cases investor pressure may be part of the problem. Particularly in the US market, where analysts tend to be more focused on short-term results, trying to please investors may push companies towards certain practices that could destroy long-term value.

This highlights the danger of focusing our (and companies’) attention on easy-to-measure factors and looking for short-term “wins” from engagement. As long-term shareholders, our most important consideration should be that managers’ incentives are aligned with long-term success and that we support companies that may need to sacrifice short-term earnings or dividends for long-term investment.

We should conduct thorough research using a mosaic of qualitative as well as quantitative sources, and use our findings to engage with the company and its other stakeholders.

Lastly, we should encourage an effective corporate culture by prompting executives to talk about culture fluently, frequently and - above all - consistently.