Why as an investor I’m looking through Brexit fears

Following the twists and turns in Westminster of the past few weeks I expect many more market participants will simply place UK equities in the “too difficult” basket. Anecdotal stories of overseas investors selling their last UK stocks could start doing the rounds again.

Brexit and political uncertainty have been a drag on UK equities, which have underperformed their global counterparts since the EU referendum of 2016. As a consequence, relative to global equities, they are now the most lowly valued they’ve been in decades (for details see Three reasons why the UK stock market looks compelling).

UK domestic stocks have suffered more than others. It’s understandable to fear uncertainty, and between now and Brexit day, currently 31 October, there remain many risks to an orderly withdrawal. However, as a stock picker I embrace the mispriced opportunities created by this environment.

In the period from mid-2013 through to the end of 2015, the UK economy outperformed the global economy, sterling was strong and UK domestic companies outperformed UK overseas earners. Then, as Brexit fears set in and the UK voted to leave the EU the trend reversed, as illustrated by the chart below. 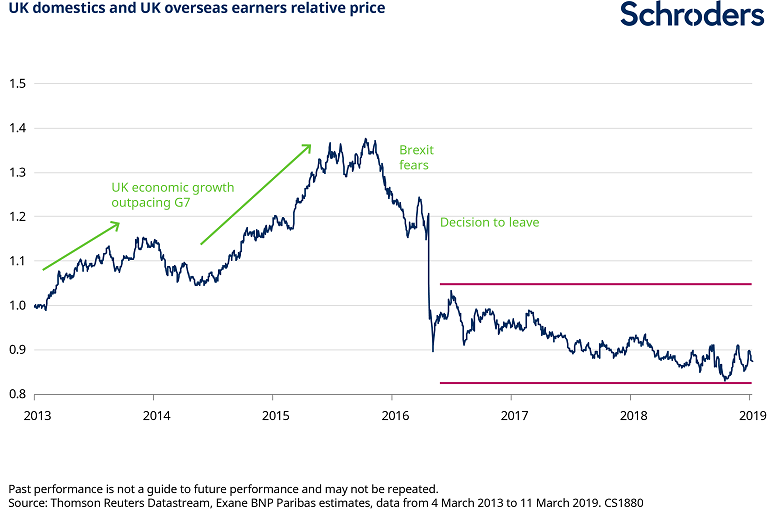 Exchange rates have been a key factor, as a weaker pound has boosted the value of overseas earners. Included in this group are the UK’s major oil and gas and mining groups, multi-national consumer goods and pharmaceutical companies, world-leading engineers and globally-diversified media businesses.

However, the reversal was also driven by UK domestic companies suffering a “de-rating” amid fears that the economy would grow at a lower rate outside the EU.

Shares or sectors can fall simply because investors view them less favourably, without any corresponding change in their near-term prospects. Collectively, investors ascribe a lower value/rating to the share or sector, which is said to suffer a de-rating by the market.

This was clearly seen in a range of valuation metrics, including price-to-earnings (P/E) ratios. The P/E ratio compares a sector’s price level to its aggregate earnings per share and in the case of some of the above areas dipped for a period into the single digits. Very challenging equity markets globally were also a factor.

Valuations might not quite be what they were then given global markets have moved higher in 2019 as central bank actions have proved supportive. However, it’s worth noting that there have been several private-equity (PE) backed bids - a number of them for domestic-focused companies - over the past three months.

As many investors have turned away, these buyers have capitalised on the relative valuation opportunity of UK equities, sterling weakness and readily-available cheap debt financing. Domestic-focused targets have included UK pub operators Greene King and EI Group, as well as BCA Marketplace, which owns the WeBuyAnyCar.com portal.

There have also been sizeable PE-backed bids during the past quarter for theme park operator Merlin Entertainments and aerospace and defence group Cobham.

There could now be a UK general election this year, which would be the third in five years. Domestic investors may begin to speculate about the possible consequences of this for the future health of the economy. This could weigh further on the value of the stock market, especially those sectors focused on the UK economy.

However, at times such as these it helps not to fixate on any one potential outcome. For example, many of the companies which could be seen as vulnerable to Labour policies are the same UK domestics discussed above. They have already been de-rated over the past three years as a result of negative sentiment due to Brexit.

It also helps to remember the unique structure of the UK equity market, which overall derives approximately two thirds of its profits from outside of the UK. As a result it has a level of in-built diversification. These overseas earnings underpin the market’s premium dividend yield.

Relative to global equities, the yield of the UK equity market has only been higher during the 1991 recession and at the peak of the technology media and telecoms (TMT) bubble. This is illustrated by the chart below. 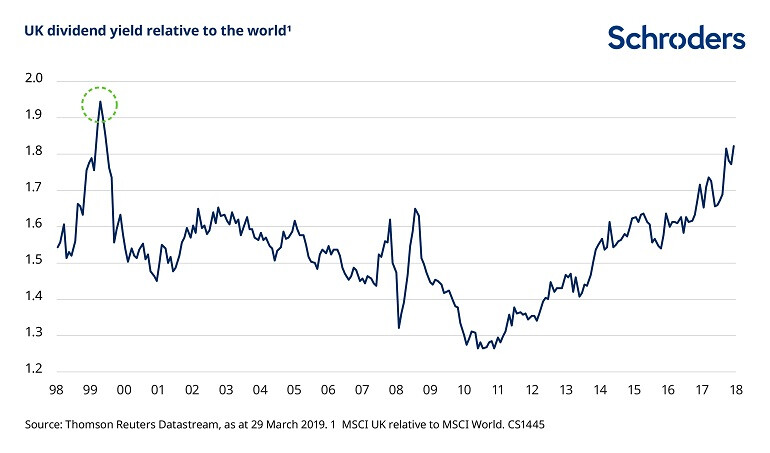 In absolute terms, the UK equity market is currently yielding c. 4.8% (MSCI UK index, 30/08/19). This compares very favourably to the average dividend yield over the past 30 years of around 3.5%. It is particularly attractive when you consider global interest rates and bond yields seem set to remain lower for longer.

For yields to revert back to their long-term average, either the market has to rise or bad news needs to arrive soon and companies cut payments.

The global economy increasingly resembles an unstable bicycle as growth had slowed markedly since the spring, liable to be tipped over by the slighted bump in the road. Wider political uncertainties, such as those around the US/China trade war, require close monitoring.

It is not possible to know how and when these events, at home or abroad will play out. However, markets have recovered from past such periods of uncertainly.

Companies with reliable business models and solid finances should be in a good position to adapt to the winds of change, creating opportunities for long-term stock pickers like ourselves.