It would be difficult to miss the fact that UK mid cap companies are attracting a renewed level of bid interest at present. So much so that, every morning, when I log in to my virtual workplace, I am mentally preparing myself to see a new headline about the next one to be bid for.

In particular, renewed demand for UK-quoted companies from large and experienced foreign buyers suggests to me that other investors continue to overlook an opportunity. Mid cap companies are at the centre of this interest from overseas companies (so-called “strategic buyers”), private equity (PE) or PE-backed purchasers.

It’s always helpful to observe what the corporate and PE sectors are doing since we share their long-term mentality. If the pick-up in “inbound” activity is a guide, it seems to me these bidders are currently thinking: “UK shares are cheap, sterling is weak, this is our opportunity to buy some prized assets outright.”

Mid caps are a synonym for the FTSE 250 index, which is the next most established group of shares trading on the London Stock Exchange outside the FTSE 100. These companies can be the target of choice for bidders – not too big, but sufficiently large to make a difference – and in 2019 close to 12% of the FTSE 250 was acquired (see below). 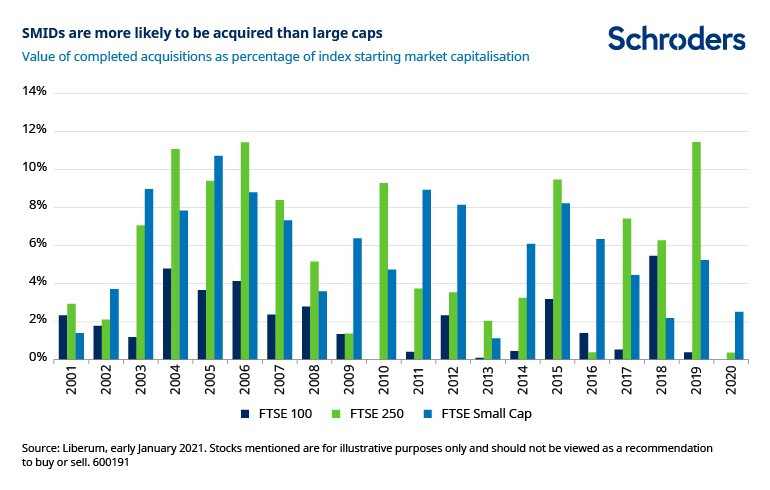 Global deal-making has resumed with gusto as debt financing has cheapened again, with policymakers slashing interest rates and restarting monetary easing in response to Covid-19. The crisis has also accelerated a number of structural trends and companies are either re-sizing their operations or capitalising on opportunities with the help of M&A.

Against this backdrop, could 2021 be another vintage year for mid cap M&A? At present it seems very possible.

We’ve seen a tussle for mid cap bookmaker William Hill, where the eponymous owner of Las Vegas’s iconic casino Caesars has seen off PE group Apollo. Meanwhile, two North American rivals (both of them PE backed) appear at the time of writing to still be vying for FTSE 250 security group G4S.

More recently, US PE groups Blackstone and Carlyle have been in competition for control of Signature Aviation. At the time of writing the mid cap aviation services company had recommended a bid from Global Infrastructure Partners, a US infrastructure fund manager.

To my mind, this interest is further evidence of the opportunity offered by UK shares, which remain in the doldrums.

While UK shares have responded well to the vaccine news in early November, and then again to the Brexit trade deal, there is an awful lot of lost ground to make up after four and half years of Brexit uncertainty.

Bidders appear to be sensing a window of opportunity, with valuations still low but uncertainty removed by the Brexit deal. At the same time, good progress with the UK’s Covid-19 immunisation programme gives a glimpse of sunlight at the end of the tunnel, as opposed to the headlights of a train running at full speed.

Whilst certainty is in short supply in many ways, we do know that the economy will, at some point, be able to properly open up again (see What happens when the party starts back up?).

If the experience from 2019 is anything to go by, all variety of mid cap companies could be in the frame for a bid.

Those snapped up last time ranged from air-to-air refuelling specialist Cobham (sold to US PE group Advent) to Suffolk brewer Greene King, which was bought by Hong Kong-based investors.

Aside from shining a light on the unloved status of UK shares, such M&A activity helps make room for the next tranche of exciting mid cap companies in a rapidly-evolving world.

These can be new (or returning companies) which join the stock market via initial public offerings (IPOs). They can also be small cap companies vying for promotion to the FTSE 250 – for this reason we’re also always watching M&A and IPO activity lower down the market for tomorrow’s potential mid caps.

Since mid caps are generally better able to capitalise on new opportunities than their larger counterparts, they tend to be more dynamic – it also helps to have a smaller base from which to achieve growth.

For all of these reasons, we’re often heard referring to the FTSE 250 as the “Heineken Index”, given its potential to “refresh” a portfolio in a way other parts of the market can’t. Cheers!