Joe Biden’s win in the US presidential election paves the way for a more coordinated approach in the transition to a low carbon world.

Democrat candidate Joe Biden’s victory in the US presidential election is an outcome that generates further positive momentum for the energy transition. Biden has said he is committed to tackling climate change and supporting clean energy.

The Republicans may well retain control of the Senate, with a run-off for Georgia’s Senate seats still pending. Lack of control of the Senate could limit some of the Democrats’ more ambitious green energy policies. However, the success of the energy transition has, in our view, never depended on the identity of president or the composition of Congress.

The move to green energy and away from fossil fuels has accelerated substantially in the US in recent years and this is largely down to efforts by individual states. States have acted not only because of their own concerns around climate change but because the economic case for clean energy is too strong to be ignored, as is the demand from energy consumers.

Biden is targeting carbon-free electricity in the US by 2035, with a 2050 deadline for the country to reach net zero carbon emissions. The European Union is also targeting net zero by 2050. Meanwhile, China has recently unveiled its first commitment to net zero emissions, with a deadline of 2060.

This means that, for the first time, the world’s three biggest economic blocs are committed to the net zero future. Together, the EU, US and China account for 55% of all carbon emissions, making their heightened climate ambitions absolutely key. The mid-century deadlines require significant action on energy transition to be taken now, with increased adoption of renewable energy critical to success.

Under Biden, the US is also expected to re-join the Paris agreement to keep global temperature rises this century below 2 degrees Celsius compared to pre-industrial levels. President Trump had taken the US out of the agreement, with the official departure coming the day after this month’s election.

The global stage isn’t the only place where we expect to see improved co-ordination. Biden’s presidency should lead to a more unanimous view on the energy transition when it comes to federal and state policy in the US.

This is something to be welcomed by energy transition investors. But we’d highlight that there has been very substantial growth in the sector in the US recently despite a lack of policy support at federal level. Indeed, the charts below highlight the growth of wind and solar capacity in the US in recent years. 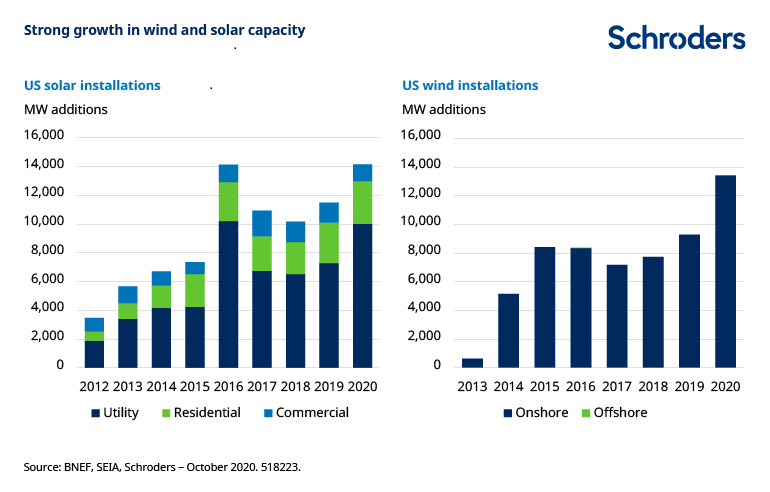 States have taken the lead

This growth has come about because many US states have set their own clean energy goals, without waiting for the federal government to lead the way. As an example, just before the 3 November presidential election, authorities in Arizona voted to join the growing list of states who had already pledged to achieve 100% carbon-free power by 2050.

Company level commitments have also been helping to accelerate the energy transition in the US. For example, in June this year Tucson Electric Power announced it would close its coal plants in Arizona by 2032, with the aim of having 70% of generation from renewables in 2035.

For states such as Arizona, the impact of climate change is becoming more evident in the form of increasingly severe heatwaves. But many states and companies have taken the lead on the energy transition not only because of climate considerations but because of simple economics.

Renewable sources of energy have already reached all-in cost parity with fossil fuels. Specifically, as the chart below shows, solar and onshore wind energy are competitive with oil and gas, and offshore wind with coal. What this means is that renewable energy isn’t just a matter of being the right choice for the environment; it’s also the sensible economic choice. 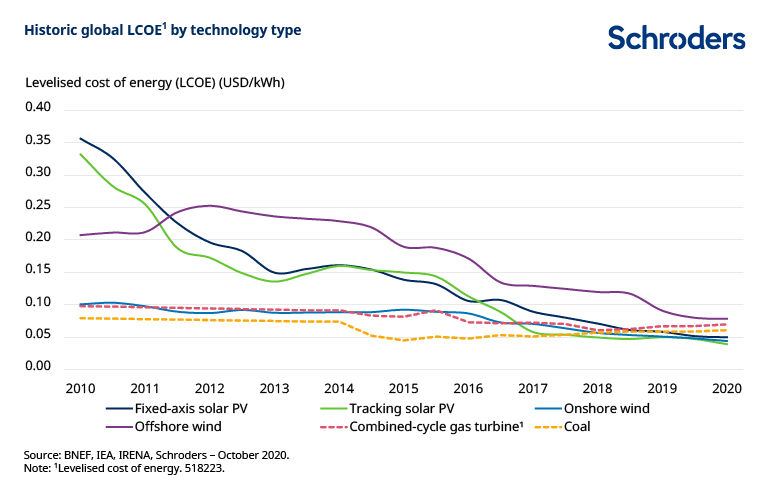 Biden has pledged $2 trillion of federal investment in clean energy and the environment over the next four years. As is often the case with political manifestos, broad goals are announced but detail on implementation is somewhat scant at this stage. However, there are some specific areas where progress seems likely.

Electric vehicles are a focus with Biden setting out plans for at least 500,000 public charging stations to be built across the country. He is also expected to extend tax credits for electric vehicle purchases.

Biden has promised to reform and extend tax credits for solar and wind power installations; existing tax credits have been winding down in recent years.

Democrats in Congress have also been pushing for a “direct pay” option which would allow federal money to be used to directly finance green energy projects rather than via tax credits. Biden is thought to support this and it could be particularly helpful in the short term given that the Covid-19 crisis has disrupted existing financing methods.

An extension to tax credits could be particularly helpful for the offshore wind industry. Projects are often subject to delays over permits, which then impact a developer’s ability to claim a tax credit in a given year as planned.

Indeed, permits for offshore wind development are another area where Biden may make changes. A recent executive order from President Trump put a ten-year ban on new energy developments offshore North Carolina, South Carolina, Georgia and Florida. The ban applies to wind as well as oil & gas, and this may be something Biden seeks to amend.

Such a move would certainly be helpful for developers in those states, but states elsewhere have already been taking the initiative when it comes to offshore wind. The chart below shows that there are numerous projects already planned. 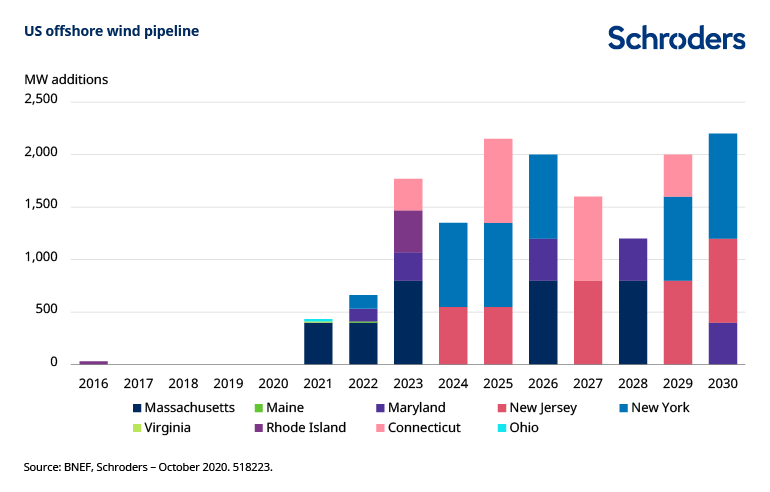 Without Democrats in control of the Senate, Biden’s room for manoeuvre in terms of federal spending will depend on what can be agreed with Congress and what can be done by executive order, bypassing Congress. But as we have seen, states both red and blue are already taking the initiative on the energy transition.

Setting out on the road to net zero

We have long argued that there are three different factors that together create the tipping point for the energy transition: political will, economics, and consumer demand. A more supportive approach from the White House is certainly an important part of this in terms of greater political will, at international level as well as within the US.

But the energy transition is a long-term structural shift that depends on far more than just one person. Steps such as re-joining the Paris Agreement are important but this is still just the start of a decades-long journey that will transform how energy is produced and consumed globally. For investors, this is a long-term opportunity and one that is not tied to changes in the US political landscape.