US inflation spike brings tapering back on Fed agenda

When combined with strong GDP growth, the US central bank will have to start thinking about slowing asset purchases.

The latest figures for US consumer prices seem to confirm the worst fears that we are heading for a sustained bout of inflation.

Headline CPI inflation rose to 4.2% year-on-year in April the highest level since September 2008. Meanwhile the core measure, which strips out food and energy prices, rose to 3%, a level last seen in 2006.

An increase was expected and we have been warning about base effects, but the gain, both on the month and the year, was more than anticipated by the markets and went beyond the rise in commodity prices.

The pressures created by the re-opening of the economy have led to bottlenecks and shortages as firms try to ramp up supply. The latest figures show airline fares, hotel rates and car rental prices jumping in April as demand returned.

Some of this reflects a correction from earlier cuts (airlines and hotels), some a problem with capacity with prices for car rentals now above pre-pandemic levels. Used car prices also jumped as people prefer to maintain social distance and drive, whilst shortages of semi-conductors are hitting the supply of new autos.

Meanwhile, more persistent sources of inflation were less worrying, as shelter prices rose a modest 2.1% y/y, which is line with its historic trend.

Measuring the output gap is difficult at the best of times, but clearly there is an adjustment to be made before the full slack in the economy can come back into play. In the face of strong demand that means prices could pick up further in the near term as the economy re-opens and CPI inflation is likely to reach nearly 5% in May.

Thereafter though, as the 8.2 million who lost their jobs during the pandemic return to work, capacity constraints should ease.

Suggestions that people are reluctant to return to work perhaps out of fear of Covid-19 or because they prefer to receive enhanced unemployment benefits are not proven in our view. Vaccination rates have been strong and although the increase in employment disappointed in the latest jobs report, seasonal adjustment issues appear to have distorted the data.

Furthermore, the participation rate picked up significantly in April as more people returned to the labour force.

Going forward we still see inflationary pressures ebbing as capacity returns and demand eases back after an initial surge of pent up spending. As we have often said, inflation operates with long lags and one of our key indicators, the growth in unit labour costs is signalling a turn in prices later in the year (see chart, below).

It is unlikely that the inflation figures will spook the Federal Reserve (Fed) although they will mean an upward revision to its forecasts. More importantly, when combined with strong growth in GDP, it will have to start to think about slowing its asset purchases.

Tapering is still some way off but looks like it will be back on the agenda for the US central bank.

Inflation rise: a spike, not a trend 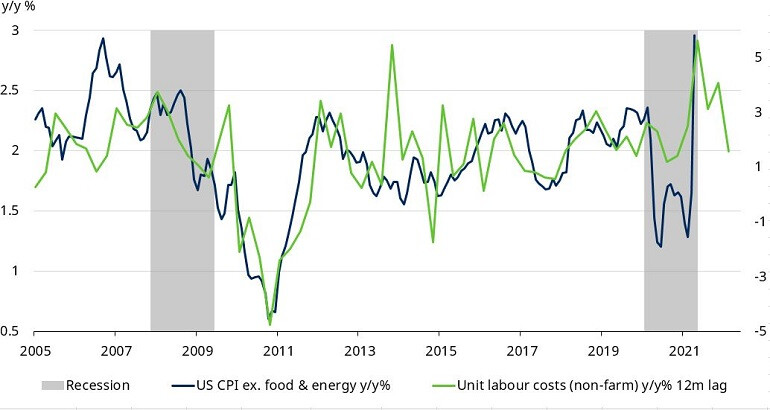