The US, the second largest global emitter of greenhouse gases (GHGs), has formally filed to withdraw from the Paris Agreement. The US accounts for around 15% of global GHG emissions and announced its intent to withdraw a while ago. It has now submitted the formal withdrawal to the United Nations in New York ahead of the 25th Conference of the Parties (COP25) in Madrid.

The annual COP event brings global leaders together to agree steps toward the commitments made under the Paris Agreement. The agreement’s aim is to limit long-run temperature rises to no more than two degrees Celsius compared with pre-industrial levels. The withdrawal by the US follows the unexpected cancelation of Chile as the original host of COP25 due to social unrest and protests in its capita city. Despite the less than optimal circumstances, we believe the event can deliver more progress. Here are two reasons we think investors in climate change can stay optimistic.

Carbon to cost corporates, so it doesn’t cost the earth

The preceding Conference of Parties - COP24 in Katowice, Poland - left a key issue for a successful implementation of the Paris Agreement unaddressed. Article 6 of the agreement addresses the use of financial markets as mechanisms for fighting climate change. In reality this could take various forms, but emission trading schemes have been on the rise globally (see chart), providing evidence that these schemes can be successfully implemented.

While prices attached to CO2 emissions across these schemes would need to rise globally to incentivise fuel switching on the scale required, much of the groundwork has been done. We expect this to be a key item on the agenda, particularly after the European Union (EU) flagged it as one of its key priorities. 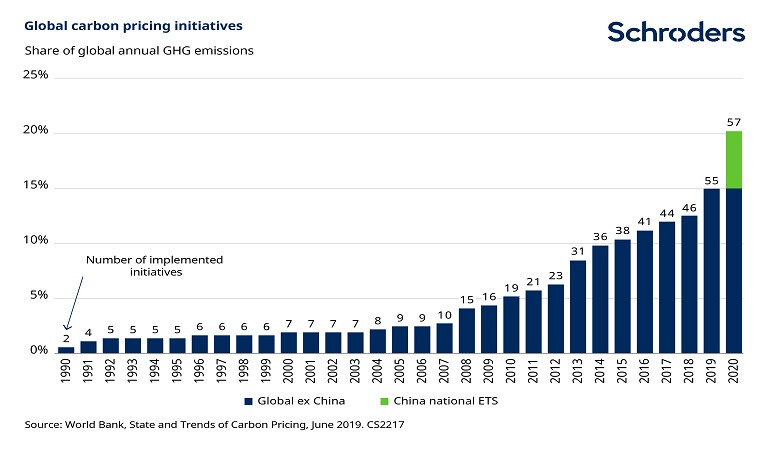 Secondly, we expect a range of updates to countries’ individual targets, known as nationally determined contributions (NDCs). Many countries have already announced more ambitious targets than what are included in their respective NDCs (such as the commitment by the UK and France to reach carbon neutrality by 2050). With more ambitious legislation and goals in place, the event is expected to generate positive news on this front. As part of the Paris Agreement, countries will have to start reporting their emissions periodically - against these NDCs - from 2020 onwards. Given the insufficient state of current ambitions, we expect targets to rise in line with a closer alignment of a 2 degrees pathway by the end of the century.

While we think the progress on NDCs is more likely than the near-term implementation of a global emission trading scheme, the upside for business models reducing GHG emissions in either event is clear.

Despite the formal filing to withdraw from the Paris Agreement by the current US administration, public concern and awareness of climate change has been increasing, resulting in more ambitious climate policies across several states within the US.

As countries start to systematically report on emissions against set targets, and market-based emissions trading mechanisms become more prevalent, we are approaching another milestone in the transition to a decarbonised economy. This works in favour of companies providing the products and services that help to mitigate and adapt to climate change.