The most obvious regions that will be affected are the US and China, but which is likely to fare worse and what is the impact likely to be on the rest of the world?

US: companies operating in China could be targeted

It could be argued that because China imports far less from the US than the US imports from China that the Chinese are limited in their ability to enter into a conventional trade war. However, this view doesn’t take into account the other means by which China can hurt the US.

This could take the form of measures aimed at making life difficult for US companies operating in China. For example, the Japanese-Korean Lotte Group, which operates 99 supermarkets in China, provided the land for the THAAD1 missile defence system in South Korea. It was subsequently targeted by Chinese authorities, who made it impossible for many stores to operate by enforcing strict fire regulations. The end result is that the group has had to pull out of the Chinese market altogether.

The US has significant operations in China: since 1990 foreign direct investment from the US to China has totalled $256.5 billion. As a result US companies are directly exposed to the Chinese market with firms like Apple generating around 20% of its total sales in China, Boeing around 12% and Nike 15% of its revenue. Measures like the ones aimed at Lotte Group could pose a serious risk to the ability of US firms to operate in China.

China may prove more resilient to a trade war than the US. The imposition of a 25% tariff on $50 billion worth of Chinese goods would undoubtedly have a significant impact on Chinese trade, particularly if it is targeted at the all-important industrial sector. 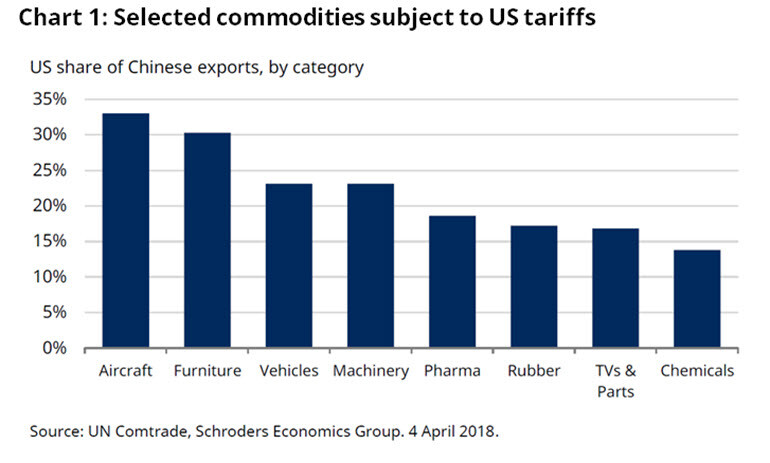 However, $50 billion worth of tariffs only constitutes about 2% of China’s total exports. Consensus seems to estimate that such tariffs will only slow Chinese growth by around 0.1–0.2% at most; even then, only if the tariffs are applied to a broader range of Chinese goods accounting for $200 billion, or 40% of China’s exports to the US.

Furthermore, China has much more scope for fiscal support, should the need arise, and the authorities are not trying to boost their popularity at this point in time, unlike President Trump who faces elections in the near future.

However, it is not just China that would be affected by rising tariffs. Often, although a good may be exported from China to the US, most of the components within it actually originated elsewhere. For Chinese trade, about 35% of the value added in exports comes from other countries.

Our research shows that tariffs on Chinese exports are much more consequential for emerging markets than those on US exports, and that the pain is likely to be concentrated in the Asian emerging markets. 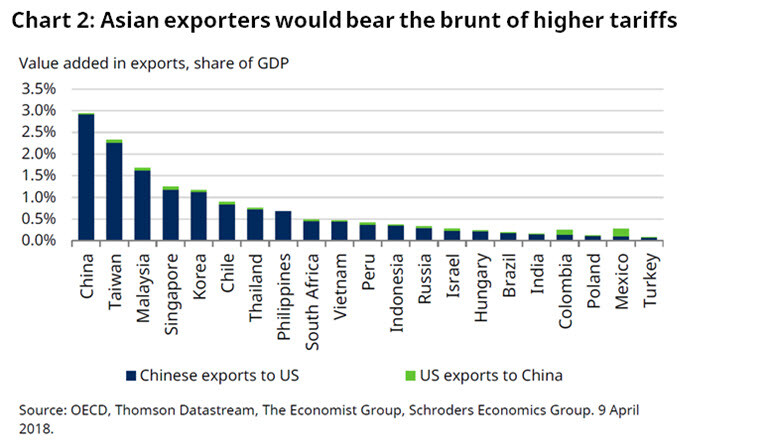 There could also be winners from any tariffs as China and the US would look to replace the supplies of impacted goods given the cost increase. The data suggests that China’s tariffs on US goods would likely benefit developed market providers more than those in the emerging markets. However, there is more scope for emerging markets to benefit from US tariffs on China as Chinese products become less competitive in the US market.

Emerging markets do offer a few potential ports of safety if a storm begins to build. Oil is unlikely to be hit by tariffs, protecting exporters like Malaysia, Mexico and Russia. Similarly, the bulk of Hungary and Poland’s exports are within the EU and therefore tariff-free. Those with limited external demand exposure and large internal markets like Brazil and India are also likely to be shielded from a trade war.

Trade is very important for Japan, with exports accounting for 18% of GDP. At first glance, escalating trade tensions between US and China seem a grave concern, given these economies are Japan’s two largest export partners.

However, in reality, the impact of the current announced tariffs would be minimal. The 25% tariff on steel and aluminium products would only affect 2% of Japanese exports to the US and 0.07% of GDP. Growth would be more impacted if the US progressed to imposing duties on machinery and transport equipment as these account for 76% of Japan’s exports to the US.

Wider tariffs may have a greater effect given Japan’s prominent place in the supply chains of both the US and China. Exposure is greatest in the supply chain of Chinese exports to the US than of US exports to China. Therefore, Japan is indirectly more vulnerable to US tariffs on Chinese goods than vice versa. 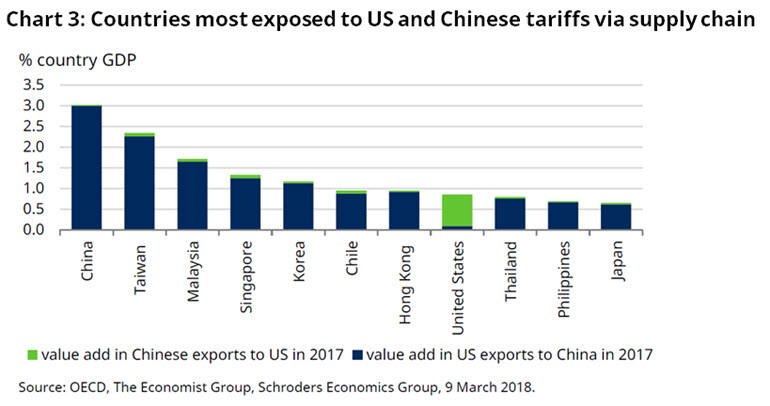 Any references to securities, sectors, regions and/or countries are for illustrative purposes only and should not be construed as advice or a recommendation to buy or sell.