The bear market story and what next - in six charts

It’s been the worst start to a year for markets since the Great Depression. We tell the story so far in six charts.

Like a bear with a sore head, many investors probably wish they had stayed in hibernation in 2022. It has been a brutal year so far, the worst since the Great Depression nearly a century ago.

Capital destruction, in other the words the amount of money wiped off the value of investments, stands at more than $9 trillion globally, exceeding the financial crisis of 2008.

Most major stock markets are in bear market territory. A bear market typically describes a condition in which prices of investments fall 20% or more from their recent high.

Crypto investors have suffered even more. The global value of all crypto currencies currently stands at just over $900 billion, down from $2.9 trillion at its peak in late 2021.

The trigger: increasing concerns the economy is barrelling towards “stagflation” - where slowing economic growth combines with accelerating inflation – or a global recession, as central banks raise interest rates and rein in money supply trying to tame spiralling inflation. The result – carnage in financial markets.

In these six charts we tell the story of the 2022 bear market so far and what investors might do next.

The battle to tame inflation

Central banks have been forced into action as inflation in most major economies has already hit 40-year highs and continues to rise. It’s brought about stark reminders of the dark days of the 1970s and early 1980s, often called the Great Inflation.

This time it’s been exacerbated by pent-up demand following the end of Covid lockdowns in most major economies, combined with supply constraints caused by Covid lags in Asia and war in Ukraine.

The result is inflation near double-digits around the world and it continues to surge. The main problem is the rising cost of energy, up 70% in 2022, which affects everything from production to consumption. But across the board commodities are up nearly 30%.

Chart 1: The rise in commodity prices 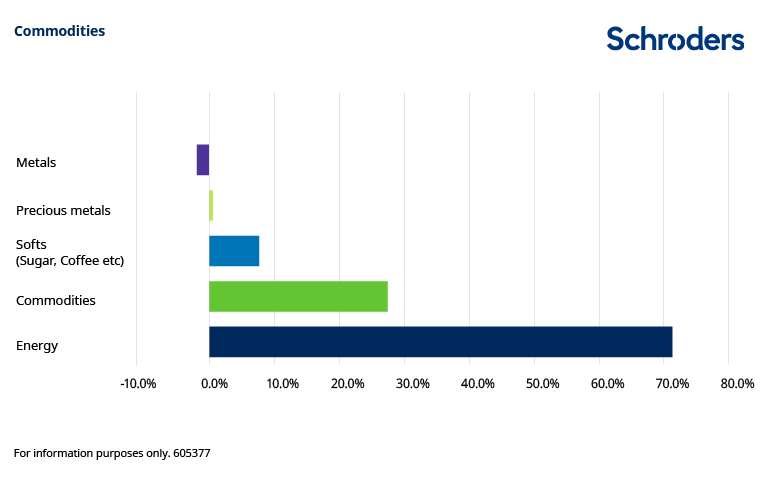 The worry for investors in stocks is that the more persistent inflation becomes, the more drastic the measures that central banks will take to contain it. If central banks don’t manage the process properly, it could lead to stagflation or even a recession - which would spell bad news  for consumers and company profits.

The result has been a rout in stock markets which has been brutal, broad-based and unremitting. From the US to China, developed economies to emerging, most stock markets are down over 15% so far in 2022, with many over the 20% bear market threshold. 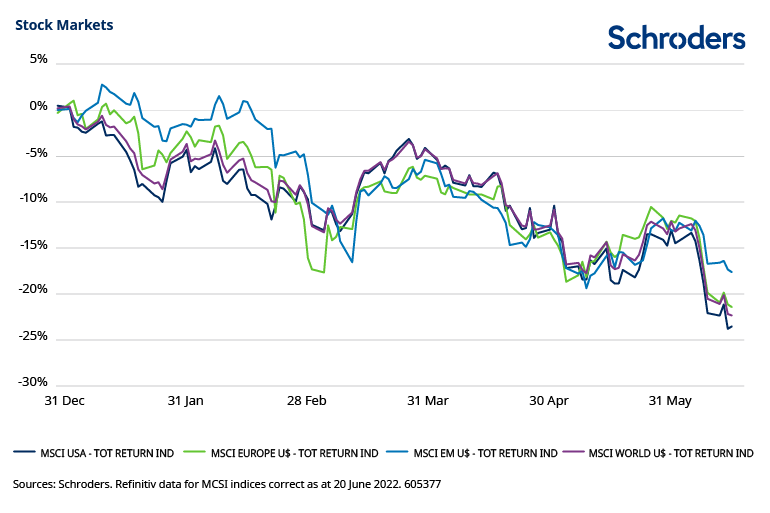 In environments like these, the riskier the investments, the harder they fall. And the crypto currency market has fallen further than most.

Terra’s tribulations have had a ripple effect across the crypto markets. Bitcoin, the leading light of crypto, is now worth around $20,000, down from its all-time high of nearly $69,000.

Chart 3: The fall of bitcoin 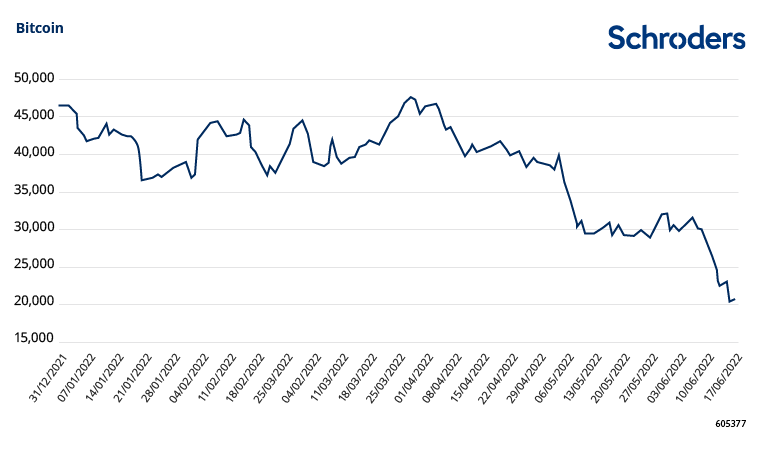 Does a bear market signal a recession?

The big question though is: just because investors are panicking, does it mean the economy will enter a recession? Let’s take a look at the world’s biggest economy, the US, for an answer.

While Schroders’ economists are not currently forecasting a recession in the US, the risks are skewed towards one. Investors can take some comfort that recessions don’t necessarily follow a bear market. That said, the odds are not favourable looking back at history.

Since the 1900s, the US economy has only managed to avoid a recession 30% of the time when a bear market has occurred.

Looking ahead, the longer the sell-off lasts for and the deeper the fall in prices, particularly against a backdrop where the Federal Reserve is hiking interest rates, then the higher the risk of a recession. 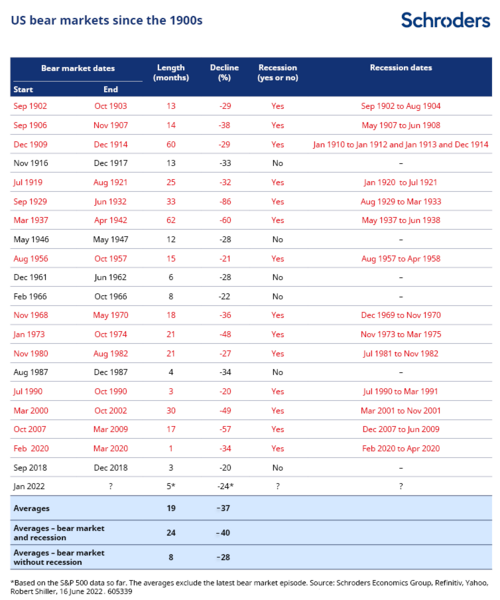 Unfortunately, it’s not just a recession investors are worried about. There is the increasing the risk of stagflation – stagnant growth, high inflation.

This means the share prices of defensive stocks tend to hold up better than cyclical stocks when the economy slows, as shown in the table below. The only exception being energy stocks.

This makes sense as the revenues of energy stocks are naturally tied to energy prices, a key component of inflation indices. By definition they should perform well when inflation rises.

This is illustrated in the table below, which displays the average historical return of 11 global economic sectors versus the MSCI World Index in stagflation environments.

Chart 5: How stocks perform during stagflation 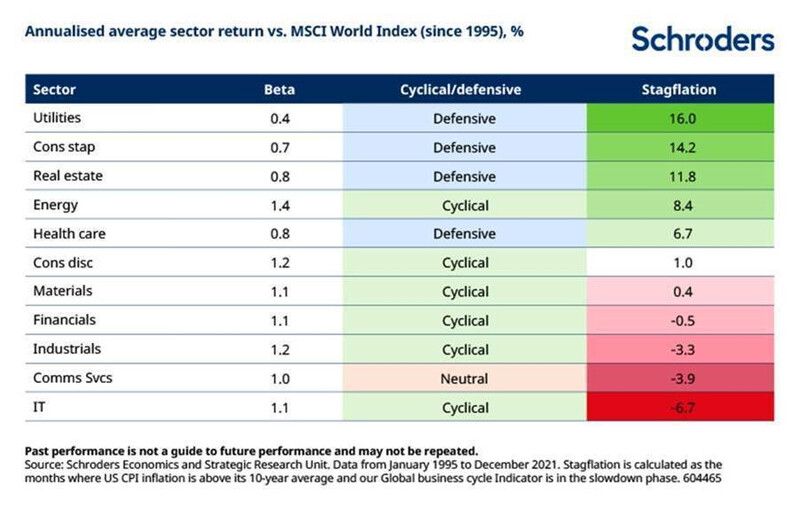 In the worst case, the Great Depression of the 1930s, investors lost over 80% of their money. It took over 15 years for them to make their money back – if they remained invested.

Other stock market falls were not quite so calamitous. In seven of the 11 episodes, investors would have recouped all losses in two years or less if invested in the S&P500 index. In the other four – 1893, 2001 and 2008 – the period to break-even was four to five years.

Chart 6: How long did US stocks take to recover losses from a 25% crash? 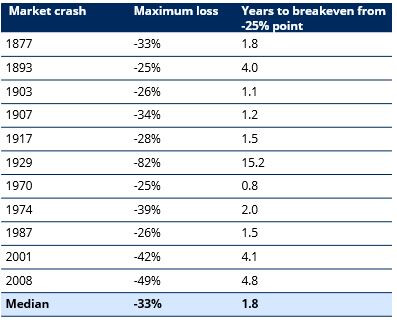 Source: Robert Shiller, Schroders. Monthly data 1871-2020. Data is for S&P 500 and assumes investors retained their exposure to the stock market.