As 2020 drew to a close, it marked not only an end to a dismal year beset by Covid-19, but also to the UK’s transition period as it ended its membership of the European Union.

There was relief over the festive period among investors that a trade deal had been finalised, helping to boost sterling. However, the details of the agreement were buried in the 1,500+ page document released on Christmas day. The deal was given provisional approval in Europe, where it was felt more time was required to scrutinise it. In the UK, the government pushed the deal through Parliament just a day before the 31 December deadline.

So what will the trade agreement mean for the future of the UK-EU trade relationship?

We have identified three key takeaways that investors should consider.

Exports in both directions will face customs checks, including the burden to provide proof of origin of the manufacture of goods. Exports will need to continue to meet EU standards and are subject to regulatory checks, not to mention the extra customs formalities which firms will now have to endure. Moreover, trade between Northern Ireland and Great Britain will effectively face additional regulations.

While there is a deal on the trade in goods, there is effectively no deal for services. UK companies have lost the right to provide services in many sectors from outside the EU.

National professional qualifications will no longer be recognised with the exception of a few areas.

Crucially, the EU has largely not deemed UK rules for financial services as equivalent. Despite initial calls from financial services businesses for some kind of special arrangements or “enhanced equivalence”, it appears that this was abandoned during talks. Both sides have agreed to establish “structured regulatory cooperation on financial services”. Among other things, this will cover any future equivalence decisions, with a framework for it to be set out in a “Memorandum of Understanding” to be agreed by March 2021.

The details are sketchy, but what is clear (and had been anticipated for some time by most UK-based financial services businesses) is that they cannot rely on an ability to “passport” from the UK into the EU. There has been a lot of discussion around delegation of asset management activities from the EU to the UK.  It is important to recognise that this does not depend on an equivalence ruling.  It requires cooperation arrangements between EU and UK regulators and this is now in place, so such delegation can continue.

On the issue of the “level playing field”, the UK will face tougher rules than other EU trade partners (such as Canada and Japan).

The EU or UK can unilaterally impose tariffs on goods if either deem non-compliance; for example, the illegal use of state aid, or loosening of labour or environmental standards.

The good news for the UK is that standards cannot be tightened going forward, and a joint committee will determine if changes need to be made. This removes the risk of non-tariff barriers being snuck in through tighter standards.

Better than no deal

Overall, the deal in place is better than the otherwise default option of moving to World Trade Organisation rules and tariffs. However, the trade agreement is far from ideal, especially for the UK.

Former prime minister Theresa May summed up the situation well, saying: “We have a deal in trade which benefits the EU, but not a deal in services, which would have benefited the UK." (30 December 2020). 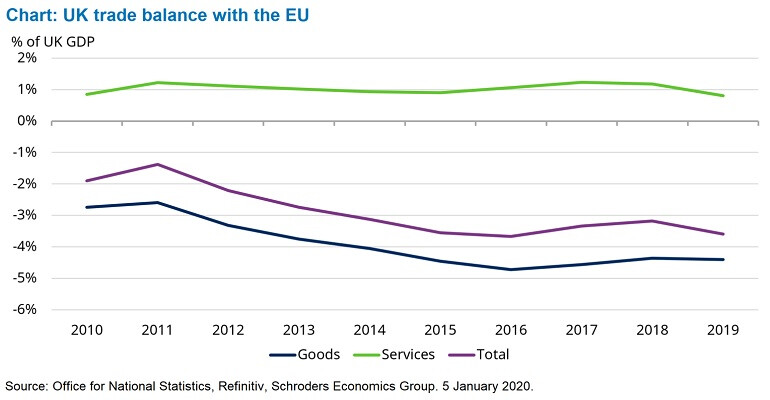 Compared to the assumptions in our forecast, the deal has yielded a slightly better outcome in that there are no apparent restrictions for agricultural products, which we had assumed may be excluded.

Unfortunately, the return to a national lockdown means that our forecast for UK growth is likely to be downgraded at the next review. With the Brexit saga concluded, the government must now focus all of its energy and resources on combating the Covid-19 pandemic.