After a spell of weaker growth, the world economy looks set to pick up in 2020, extending one of the longest ever periods of expansion. The slowdown this year has led to concerns that the US economy might contract. In fact, we see activity gaining support from an easing in US-China trade tensions and lower US interest rates. We have upgraded our 2020 global growth forecast, from 2.4% to 2.6%.

We expect a "phase one" deal between the US and China, which was first announced in mid-October, but is yet to be finalised. It would hopefully prevent the two countries implementing further tariffs  on each others’ exports and potentially reduce those in place.

This would prompt global trade and business investment to strengthen. Activity could then improve in Europe and Japan, as well as the US. We have also upgraded our growth outlook for China. We see emerging market economies gathering pace on the whole, although there are still concerns around country-specific issues in Hong Kong SAR and Argentina. 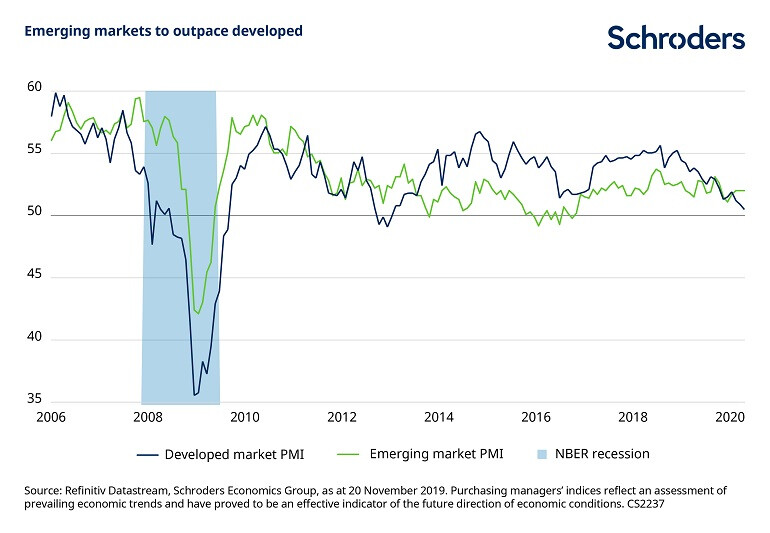 The prospects of a trade deal have improved, as the chart below shows. The index displayed monitors the number of Reuters newswire articles containing pro-trade deal keywords compared to those containing anti-trade deal words.

There are good reasons President Trump may be more willing to strike a deal now. The president, facing impeachment proceedings at home, and with the election looming, needs to boost US activity. Having already played the fiscal card through tax cuts in 2018, he is left with little option but to provide some relief on trade particularly to his base through increased purchases by China of agricultural products.  Meanwhile, the US seems reluctant to reduce tariffs, which China is pushing for, and progress is slow. 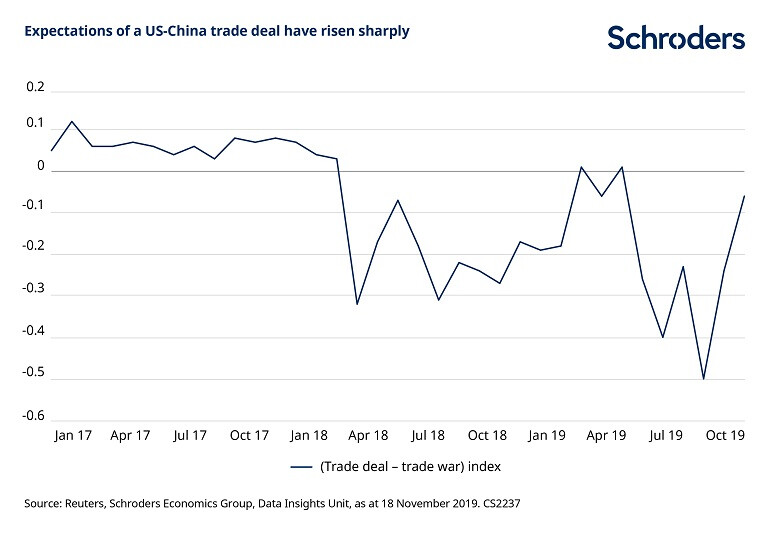 The prospect of at least a partial trade deal between the US and China is good news for the large export-driven economies of the eurozone. With many European economies seeing healthy domestic conditions, a rebound in trade could lead to a positive outcome for the region in 2020. We have raised our forecast to 1.2%, from 0.9%.

We are somewhat sceptical on this front. Those economies with most room to increase spending, Germany and the Netherlands notably, are inherently wedded to limited spending. They tend to plan decades ahead and are predominantly concerned with paying for the care and retirement of ageing populations. We see only limited support action from these governments.

A fiscal expansion looks more likely in the UK. The two main parties are vying to outspend each other. UK economic data has been distorted by “Brexit effects” such as stockpiling. The UK economy, led by the household sector, has coped well, but is likely to remain subdued and the Bank of England on hold.

We see an acceleration for most emerging markets, as trade recovers and inflation remains limited, to allow for some further moderate rate cuts. Government measures look likely to play a key role.

We see positive prospects for Brazil, as pension reforms should boost confidence, encouraging economic activity. By contrast, India is beset by challenges, particularly with its banks. We will hopefully see an improvement on the back of government action. Russia’s leaders remain focused on economic stability and steady, but low growth.

It is a significant year for China. In 2010, the government pledged to double the size of the economy and average incomes by 2020. To meet these aims the authorities will at least need to ensure growth stays at the symbolic 6% level. Further moderate policy easing is possible.

Much depends on the US-China deal, and geopolitical risk remains. Tensions between Russia and the US are unresolved and there is a possibility of additional sanctions.

Low US interest rates another pillar of support

In addition to support from a reduction in trade tensions, the benefits of lower interest rates – which makes borrowing money easier – will also be felt. Monetary conditions overall, taking into account central bank interest rates, bond yields and the US dollar, are the loosest for nearly a decade (see chart). This makes it easier  for households and businesses to borrow and  for money to flow around the global system. We are already seeing the effect of this in the US housing market, where mortgage applications and housebuilding have picked up sharply. 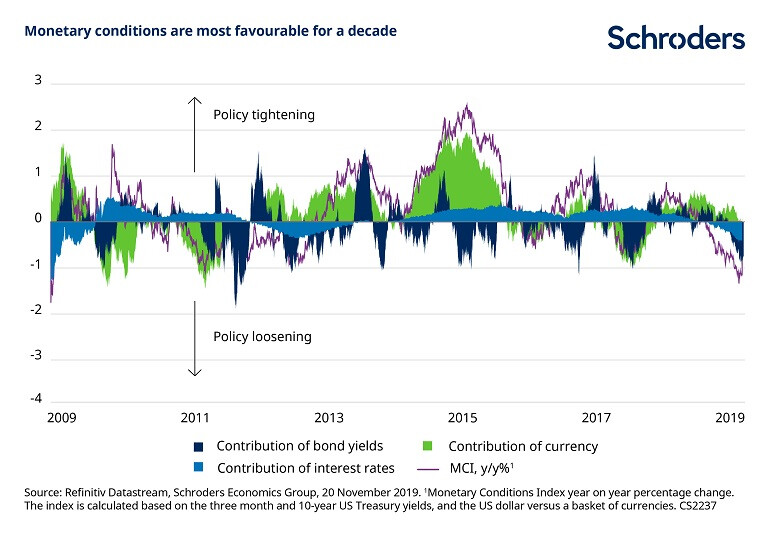 Despite a better growth outlook, global inflation remains relatively stable. We expect US core inflation (measuring price increases, but excluding volatile items like food and energy) will finish 2019 at 2.5%. This is above the Federal Reserve’s (Fed) 2% target, but the central bank will likely tolerate an overshoot, given lingering concerns of deflation. Additionally, the risk that oil prices drive inflation higher is low. We think with this level of inflation, and growth below the long-term trend, the Fed could cut rates again in April.

Broadly, we now see the balance of risks between growth and inflation as more evenly spread. Underpinned by the strength of the US labour market, there remains a risk  of wages accelerating by more than expected in our central view (see chart 4). The chart shows how the rising employment rate results in rising wages. This should be positive for consumption, but could prompt the Fed to tighten policy to cool the economy and dampen inflationary pressures. 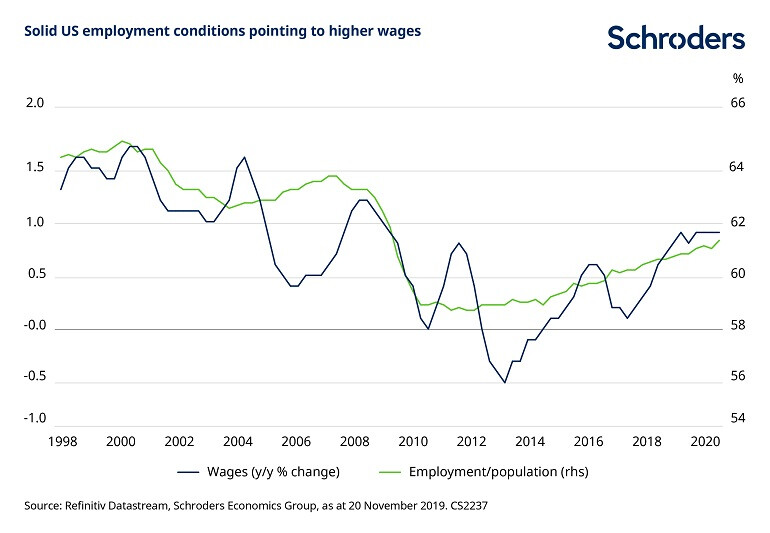 In September, we saw a higher risk of weaker growth combined with higher inflation, we now see a healthier balance between growth and inflation risks. For example, alongside stronger wages  households could respond to lower interest rates by borrowing and spending more, with the US consumer once more becoming a driver of global growth. This could have an inflationary impact, an outcome markets seem to be paying little attention to. On the downside, a failure for the US and China to strike a phase one trade deal could send global activity into a downturn.