Markets on edge as recession approaches

As central banks raise interest rates at an unprecedented pace, it looks increasingly likely that we will see recessions in the US, UK and Eurozone.

Over the past three decades, investors have been in the fortunate position of being able to take “price stability” for granted. If anything, for much of the recent past, inflation was generally a little lower than central banks would have liked.

We are in a very different position today, however. Over the past year, Western economies have experienced very high levels of inflation, with recent figures suggesting UK prices have risen an astonishing 10% over the past year. We have not seen such high inflation since the late 1970s and early 1980s.

This is no longer simply a reflection of supply-chain bottlenecks and higher commodity prices, resulting from the pandemic and the invasion of Ukraine. Today's inflation is far more widespread, as was the case in the 1970s. Prices are rising throughout developed market economies – including wages, rent and the cost of services. For now, the key difference from the inflation of 40 years ago is that consumer expectations of future inflation remain subdued – in other words, people do not think today’s high levels of inflation will be permanent. Central banks are quickly raising interest rates to bring inflation under control before this changes.

While interest rates are not yet at historically high levels, they are rising at a historically fast pace. In the recent past, central banks have tended to raise rates cautiously, in increments of a quarter of a percentage point. This year, however, the US Federal Reserve and European Central Bank have both increased rates by three-quarters of a percentage point. It is the largest-ever move in interest rates for the ECB.

This dramatic shift in monetary policy is likely to result in a recession in the US and other developed economies. Our research shows that bringing inflation down from such high levels has in the past always involved recessions. The additional challenges arising from high energy prices – and possible energy shortages over the winter – make it even more likely, especially in Europe.

Is the US heading towards recession?

Equity markets are pricing in a slowdown in industrial activity 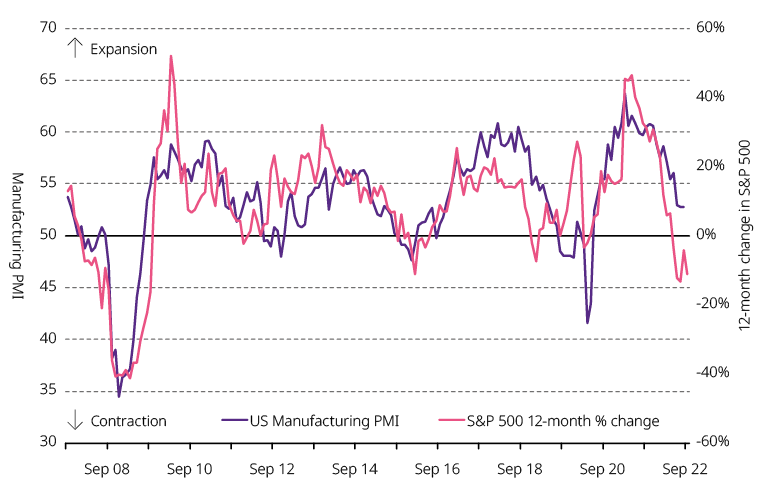 Schroders' economists now forecast global economic growth of 2.6% for this year, slowing to just 1.5% in 2023. Apart from the Covid-19 pandemic, this will be the weakest year for the world economy since 2009. This envisages contractions in the US, the UK and the eurozone, with expansion in China and emerging markets keeping the global economy growing.

This gloomy backdrop has not been a good environment for equities. Global equities fell 25% (in USD terms) in the first nine months of the year. The weakness has not been limited to equities: bond prices have also fallen sharply this year in response to central banks raising interest rates. There have been few places for investors to hide in the two biggest asset classes.

Equities might have been even weaker were it not for the resilience of corporate earnings. Much of this is due to the recovery of profits at energy companies. Excluding the sector, year-on-year earnings growth in the second quarter was -3% in the US and 6% in Europe. The strength of the US dollar likely explains much of the regional disparity: weakness in non-US currencies means lower overseas sales for US companies, while non-US companies have seen their US dollar revenues increase in value. Leaving aside currency considerations, the latest numbers suggest that big companies are still able to pass on much of the cost inflation they are experiencing. It is doubtful whether this can be sustained as inflation and rising rates pressure consumer spending.

No place to hide in traditional asset classes

Equities and bonds have both delivered negative returns in 2022 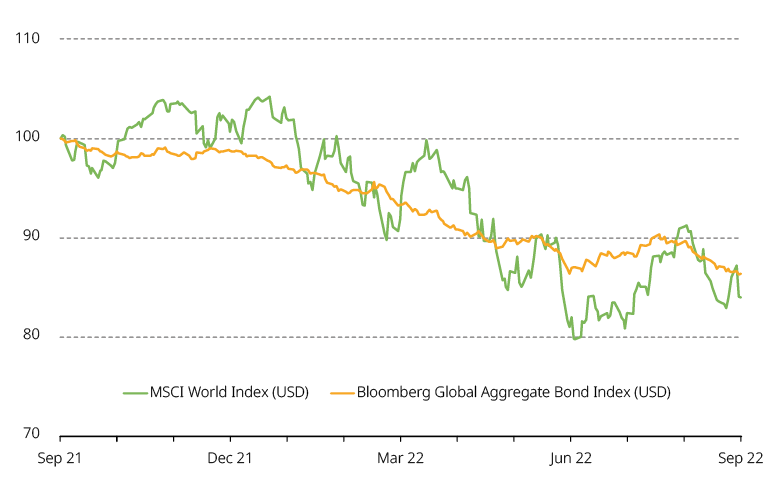 Looking beyond a recession

At some point, and likely well before the end of any recession, markets will begin rallying in anticipation of an economic recovery. We are not at this stage yet, despite a false dawn in August when US equities staged a near-15% rebound in anticipation of a “pivot” in Federal Reserve policy. The rally quickly reversed as the Fed made clear it will not yet be slowing the pace of interest rate rises. A more positive stance could become appropriate in the first half of 2023 when the full impact of this year’s rate rises becomes more apparent. At this point, markets could start focusing on interest rate cuts and a return to economic growth.

Today’s challenging economic environment could well throw up some unexpected winners and losers. One lesson of the pandemic was that businesses can adapt to changed circumstances very quickly. Within months, many businesses had found innovative ways to cope with stringent Covid restrictions and jittery customers. It should not be assumed that they will simply wait for an end to today’s economic challenges – such as labour and energy shortages and supply chain disruption. These obstacles may, sadly, prove insurmountable for many smaller businesses. But many larger companies will find innovative ways to benefit from new technologies and increased investment in infrastructure. The latter will be particularly important for Europe, as it seeks to urgently reduce its dependence on Russian gas.

This takes us to news emerging from Ukraine. The country’s recent military successes against Russia show that Ukraine may in fact be able to push back the invasion, something that seemed unimaginable a few months ago. This could unlock more Western support. It should also strengthen European resolve as Russia cuts gas supplies to the continent.

An escalation of the war remains a significant risk, as Russia’s plan to mobilise troops and nuclear threats make clear. However, it is also possible that recent developments could encourage Putin to look for a way out of a war he can no longer win. A resolution of the conflict, along with the restoration of European gas supplies, would be a huge shot in the arm of the global economy. It would ease the job of tackling inflation, perhaps meaning interest rates don’t have to rise quite as high. It could also lower geopolitical tensions as other challengers to the status quo reassess the prospect of success in the face of a united West.