The US “yield curve”, or part of it, has “inverted” once more. This bond market measure has been a reliable predictor of US recessions over the last four decades.

With only one exception, each time the yield curve has inverted, the US economy has entered a downturn within 18 months.

What is the yield curve?

The yield curve is the difference between the interest rate on a longer-dated bond and a shorter-dated bond. Bonds are debt issued by a country or a company.

For instance, typically it should cost less to borrow money for two years than for 10 years. This is because the economy is expected to grow over time and experience inflation, which erodes the value of money. A healthy yield curve should therefore slope upwards.

What happens when it doesn’t?

When it costs more to borrow money in the short term than it does in the long term, the yield curve slopes downwards – that is, it inverts.

At best, an inversion suggests that investors expect the economy to slow, at worst it signals a recession could be on the way.

Why does the yield curve matter?

“The conditions for a recession are growing, notably the pressures facing US consumers. And so too are the quantitative signals, notably the inversion of the 2 to 10-year yield curve, which has been a reliable indicator of impending recession in the past.

“The Federal Reserve (Fed) is not concerned about a recession yet. The reason for this seems to be found in its focus on the very short-end of the curve. Namely, bonds that will mature in less than 2 years.

“Here, the central bank is focused on the interest on a 3-month bond today being considerably lower than where it is expected to be in 18 months’ time. The 10-year yield minus 3-month Treasury yield curve also remains steeper. It is far from inverted.

“In the past, the 2 to 10-year curve has inverted anywhere from 31 to 126 days earlier than the 3-month to 10-year curve. So it is telling us that a recession is now likely, but doesn’t tell us that much about when it will happen. As the Fed highlights, the real red flag comes from the 3-month yield. When that flattens toward future expectations and the 10-year yield it spells a potential economic downturn.”

The charts below show the difference between 2 and 10-year, and 3-month to 10-year government bond yields in the US, which creates the yield curve. The second chart shows the instances over the past 40 years where yield curve inversion has preceded recessions. 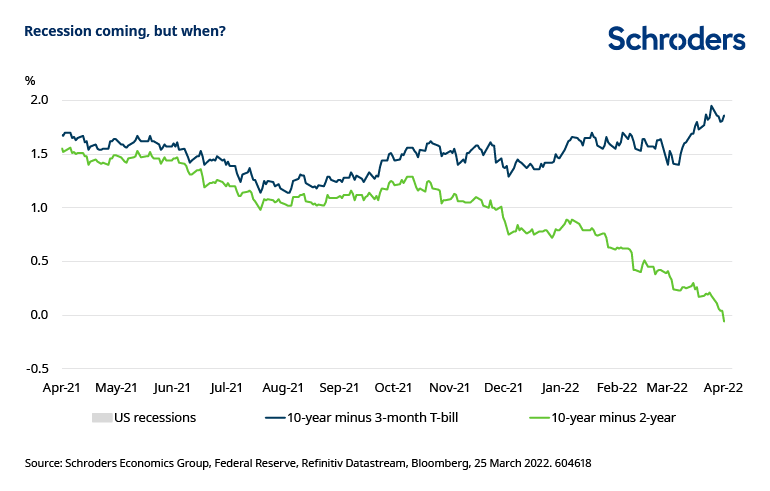 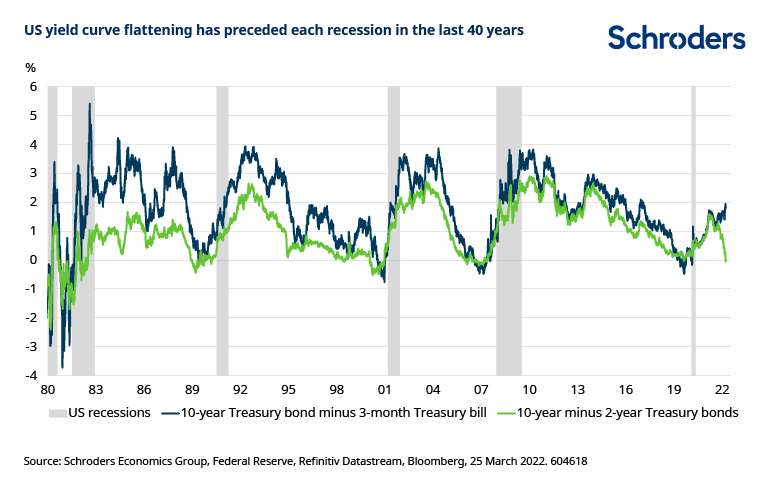