How Russia’s invasion of Ukraine threatens the global food supply

The shocking war in Ukraine will worsen the already fragile global food system. 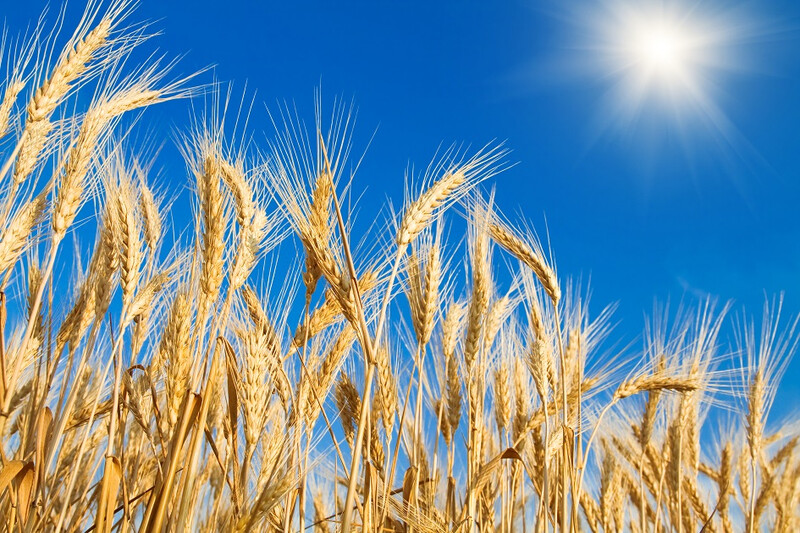 The tragic impact of Russia’s invasion is first and foremost being felt by the people of Ukraine. In time, however, this crisis poses risks to food supply that will have an impact more widely around the world.

Much has been discussed about Russia’s role as a supplier of oil & gas to the rest of the world, but its status as a key producer of agricultural commodities means there is a real risk of future food shortages. In turn, this highlights how much more needs to be done to ensure a sustainable food and water system.

Russia is a key producer of crops and fertiliser inputs

Russia and Ukraine together account for around 30% of the world’s wheat exports, as the chart below shows. 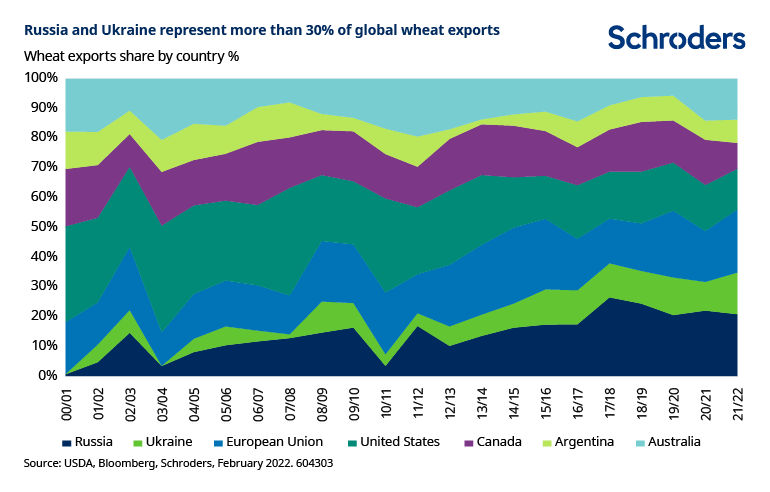 Clearly, disruption to the export of wheat will have ramifications for consumers in terms of both availability and price. It is emerging markets that are likely to see a disproportionate impact given they have been the traditional destination of Russian wheat. In recent years  the top three markets for Russian wheat exports have been Egypt, Turkey and Bangladesh.

The situation will be exacerbated if governments of richer nations, such as in the EU, start to intervene in agricultural markets by subsidising food prices in order to cap the inflation being felt by their citizens. This could lead to a scenario where the food availability gap between richer and poorer nations widens even more as prices are driven above what people can afford in countries that already suffer from food scarcity.

We were particularly struck by a recent statement from Norwegian fertiliser company Yara which indicated the scale of potential crop shortages due to disruption to farming.

Yara said: “Farmers are now entering a crucial stage in the agricultural season in which input factors such as fertiliser, seeds and water will determine the yield of the coming harvest. The most extreme calculations indicate that if fertiliser is not added to the soil, the crops can be reduced by 50% by the next harvest.”

The impact of this is extremely alarming, even if the disruption were confined to Ukraine. But the problem extends further because Russia is not only a large producer of wheat, but also of the resources that go into fertiliser products such as nitrogen, phosphate and potash.

The potash market in particular is highly concentrated. 80% of all exported potash comes from just three countries - Canada, Belarus and Russia – with 40% coming from the latter two together (figures from Yara).

The sanctions being imposed on Russia and Belarus by the West will disrupt the trade of these commodities, with a knock-on impact to crop yields in countries around the world.

This comes at a time when climate change and extreme weather events are already putting pressure on agricultural land. For example, a hot, dry summer last year reduced Canada’s wheat output. Estimates by academics indicate that even under a 2°C of warming scenario, corn yields are expected to decline by 14%, and wheat by 12%

And at the same time, a growing global population requires rising amounts of food.

“At 2°C or higher, global warming will progressively weaken soil health and ecosystem services such as pollination, increase pressure from pests and diseases, and reduce marine animal biomass, undermining food productivity in many regions on land and in the ocean”.

The invasion of Ukraine and its implications for the supply of fertiliser and food exposes and exacerbates the weaknesses in the food and water system.

If left unchecked, this could have extremely negative impacts across the world. While the shortages in this case will be a consequence of war, lack of food security can be a cause of conflict in itself.

Returning to Yara’s statement, the company said: “A world with unstable food supply is a world with famine in parts of the world, increased mortality, armed conflict, migration, riots, and destabilised societies which can further accelerate geopolitical tensions.” We share these concerns.

Making food and water sustainable must be global priority

In our view, creating a sustainable food and water system is one of the most urgent challenges facing the world today. We need the companies that ensure food security and sustainability to ramp up quickly to try to prevent these negative consequences.

We think $30 trillion needs to be invested between now and 2050 in order to achieve this. The three structural changes that are needed are: 1) higher agricultural yields and efficiency, which can be enabled by technology; 2) changes to global diets, including lower meat consumption; 3) a major reduction in waste and emissions.