Soaring gas and electricity prices are here to stay this winter, and highlight the need for increased investment in energy transition technologies. 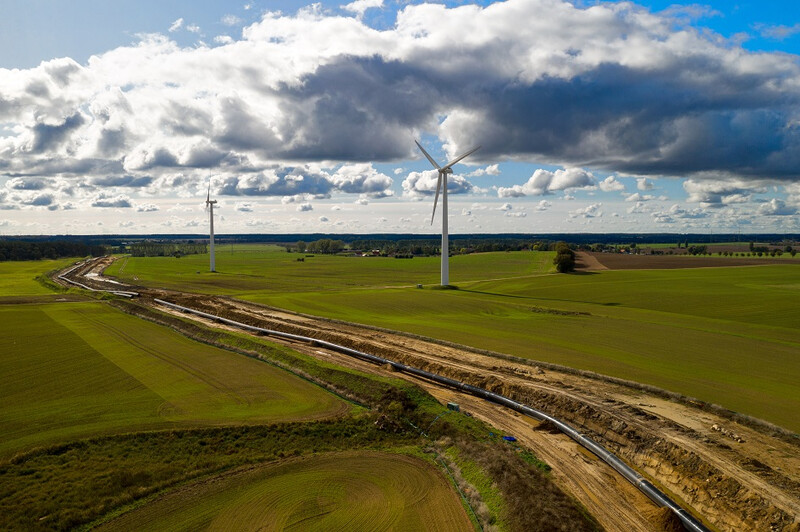 Rising gas and electricity prices have been hitting the headlines in recent weeks. Europe appears to be the centre of the storm, although it’s certainly not alone in seeing sharp price increases. China is also suffering energy shortages and is rationing power in some provinces as a result.

Many of the supply and demand drivers behind the price rises are also global in nature. However, there are some Europe-specific factors that could serve to keep prices high and there is no easy fix to bring prices back down rapidly.

Firstly, as the chart below shows, power prices have jumped sharply in Europe in recent weeks. Most of this price surge is to do with shortages of natural gas. 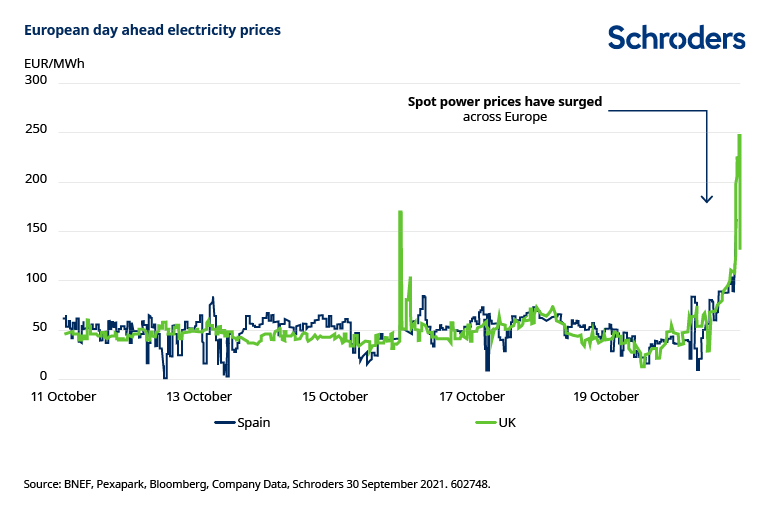 Natural gas has long been seen as a “transitional” fuel for power generation. Compared to coal, it produces the same energy but with half the CO2 emissions. It’s by no means a long-term solution if we’re going to reach net zero emissions targets (unless carbon capture technology can be applied) but it’s a useful stopgap while coal is phased out.

However, partly as a result of its doubtful long-term future, there has been underinvestment in natural gas. Many integrated oil & gas companies have been reluctant to sanction new projects given that their wider aim is to transition towards renewable energy.

Meanwhile, low regional gas prices in previous years caused various LNG (liquified natural gas) export projects to be stopped or deferred. Projects that would have been providing supply in 2019, 2020 and 2021 are now only likely to supply global gas markets in 2025 and beyond.

At the same time, gas in storage is low globally. The chart below indicates how gas storage levels in Europe are far below the norm as we head into the colder winter months. 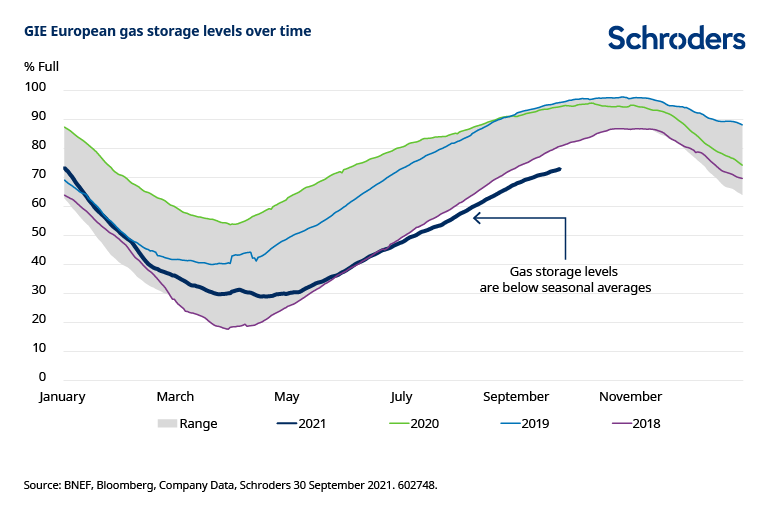 That shortfall in gas availability is now coinciding with an increase in demand. Recent coal-fired shut ins and unfavourable weather are impacting other sources of power generation. The chart below shows how wind speeds in the UK have been far lower than usual over much of the summer and into September, negatively affecting wind power generation. 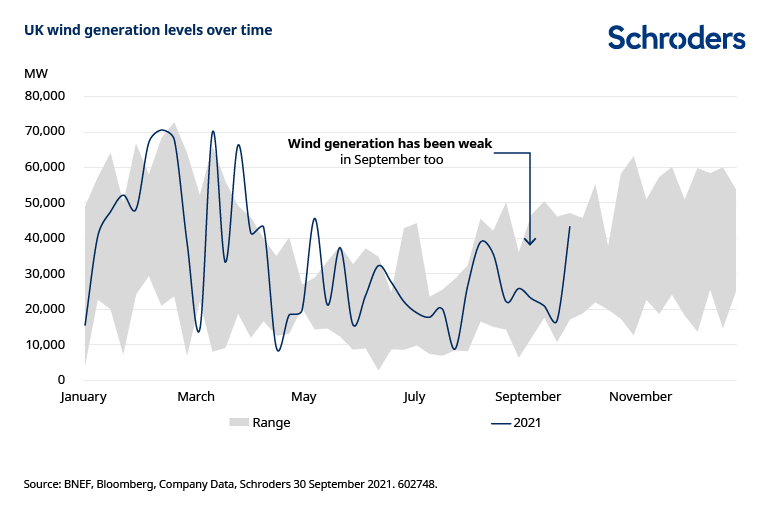 The current situation is not an argument against the ability of renewable energy to supply our power needs; it merely highlights how the investment rates in the energy transition space need to increase.

If countries are going to meet their ambitious 2030 targets to reduce harmful emissions, they will need to up investment levels. In turn, this will provide much needed flexibility in global power markets.

However, that will take some time and there is no quick fix to overcome the gas shortage right now. The Groningen gas field in the Netherlands, once Europe’s biggest gas producer, has reduced production dramatically over the past decade due to earthquake risk from drilling.

Europe is therefore very reliant on Russia for gas supply but Russian storage levels were depleted along with the rest of the world. Volumes are still recovering after a fire at the Novy Urengoy plant in August and Russia is still waiting for Europe to approve the Nordstream 2 pipeline. We think it unlikely that gas volumes from Nordstream 2 will be hitting the European market before the end of this year.

Added to that, it is unlikely that wind power can come to the rescue right away and help bring overall power prices down. The chart below shows how wind power typically accounts for a large proportion of Europe’s electricity demand in Q4, but that there could be a shortfall again in Q1. 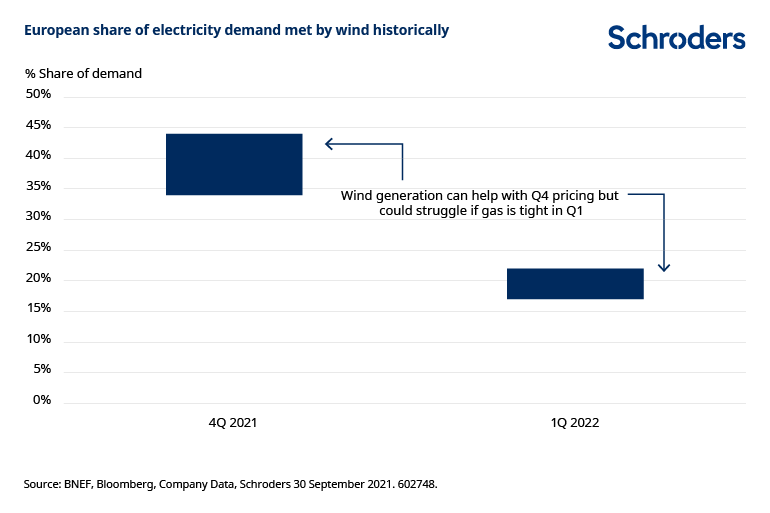 We therefore don’t anticipate the current tight situation in European power markets will ease until around June next year.

And of course, electricity cannot simply substitute for gas. The UK, for example is reliant on gas for almost all of its heating needs.

In the near term, the rising gas price is clearly good for energy companies with gas exposure who will benefit from growing cash flows over the next few quarters.

A note of caution is warranted though, because there is no guarantee that customers will simply pay ever-higher prices. If supply can’t keep up then demand may fall. We have already seen in the UK how rising gas prices caused some fertiliser firms to shut down production, with a knock-on impact to the food industry.

With the higher gas price also sending electricity prices higher, we are starting to see an increase in the pricing of power purchase agreements (PPAs) in both the US and Europe. These are long-term electricity supply agreements between power producers and a customer. This is positive for the developers of new power projects who are currently able to more than offset rising equipment costs by achieving higher PPA prices.

On a longer-term view, the tight power market should be supportive in terms of speeding up investment rates in the energy transition. More renewable power generation and storage is clearly needed.

Taking a broader view, however, these power price rises are feeding into an environment that was already seeing pockets of inflation and supply chain disruption. Businesses and consumers will ultimately bear the brunt of the price rises and that is likely to have an impact on the economy more widely.

Investors will need to tread carefully, not just in the energy or energy transition sectors but in the wider equity market too.