Financial markets remain unprepared for the extent of disruption that climate change will bring, according to a new report. In September, the United Nation’s Principles for Responsible Investment (PRI) - a network of investors whose members include 500 global asset managers - released a report concluding markets have not priced in the coming policy response to climate change. More importantly, it concluded that investors should expect a response by 2025 “that will be forceful, abrupt and disorderly because of the delay”.

The Schroders Global Climate Change team has long believed that climate change disruption is not factored in by markets. It is generally well perceived that financial markets are fairly good at factoring in short-term, minor changes to company prospects quickly, but bad at factoring in uncertainty, inflection points, and disruption. Climate change represents all of these things.

How long will it take voters and policy makers to recognise that the long-term consequences of inaction dwarf the costs of a fast transition away from fossil fuels? Will voters sustain support for 2050 net-zero carbon government policies or will they turn away from them in periods of economic stress?

Inflection points are rarely clear at the time. All that is apparent are the early indicators of change. It is often hard to have conviction in a radically different situation to the current one, and comforting to identify reasons why change may be slow. The substitution of renewable energy and electric vehicles for fossil fuel power and mobility is arguably at this inflection point, and it is now possible to see a complete decarbonisation of these industries with available technology. Even so, few investors appreciate the scale of change underway.

Markets are very bad at pricing in disruption, as we have written about before (here). Management teams often fall into the “incumbents’ dilemma”. That is to say, even if they recognise a threat to their business, they often feel compelled to protect their existing revenue streams. Investors also tend to focus too much on near-term cash flows of a disrupted business, comforting themselves that the shares are ‘cheap’ relative to current earnings, only to be surprised when things start to decline. Businesses in decline generally do not make for good investments, as it is very costly to restructure a business, the whole process saps workforce morale, and fixed costs usually result in profit disappointments.

Until recently, most of the market attention on climate-disrupted assets has focused on coal.  These are the most obvious “stranded assets” as the developed world moves away from coal-fired power. Coal prices have fallen to multi-year lows, every week there is another announcement of early retirements of coal-fired power stations.

As we write, Spanish utility company Endesa has announced it is closing its two remaining coal-fired generation plants in Spain, likely resulting in a booked loss of most, if not all, of the €1.3 billion value of these assets. However, much less attention has been given to other parts of the economy that will be disrupted by climate change. Property and aerospace are two examples where asset prices might just be at the beginning of factoring in the consequences of climate change.

The aerospace industry has had a fantastic run. A record long economic expansion and growth of global tourism have driven very steady growth in the industry. Over the last 10 years, the MSCI World Aerospace and Defence industry produced an annual total return of 13.8%, double the 6.8% annual return on the MSCI World.

The assets in this industry (mainly airports and aircraft) are very long-lived and so future industry conditions are critical to their value. Yet, unlike the automobile industry, the commercial aerospace industry has no commercially viable technological solution to substantially reduce its emissions. Its continued expansion is thus entirely inconsistent with many of the new long-term targets and ambitions being put in place by governments. After decades of declines in the cost of air travel that have promoted its growth, prices will need to be raised to either curtail demand growth, or simply to price in the costs of CO2 emissions produced by the industry. The CO2 emissions per passenger kilometre for air travel are very high. 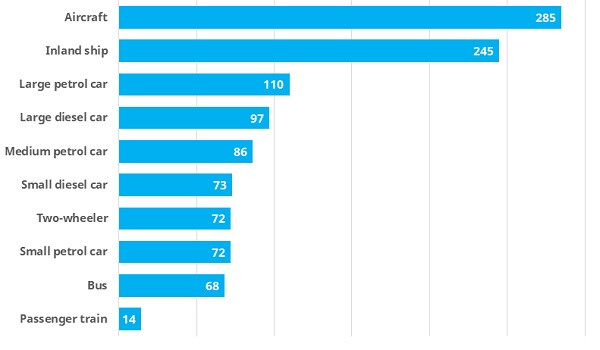 Research from Sanford Bernstein suggests that if the airline industry had to pay the CO2 costs of its emissions, it would have wiped out 40% of last years’ industry profits. In future, as carbon rises further, the burden will grow much bigger.

At the same time, video conferencing technology has matured to the point that it can be a substitute for a significant portion of business travel. Business travel is the most profitable part for airlines, and with more and more corporates embracing plans to become net carbon neutral, the use of air travel is in the cross-hairs. The next 10 years does not look as good for this industry as the last.

Until recently, the physical effects of climate change have seemed largely theoretical to many people. However, increasing extreme weather events and accelerating sea level rise are raising public awareness to a level where property asset prices are likely to be affected. For example, this month a report by investment group CLSA (Credit Lyonnais Securities Asia) and CWR (China Water Affairs) looked at the vulnerability of Hong Kong to storm surges under rising sea levels. In particular, they looked at the 2018 Super Typhoon Mangkhut, which caused a storm surge of 3.9m in Hong Kong’s Victoria Harbour, and Super Typhoon Hato, which reached 5.6m in Macau’s Inner Harbour. The research concludes that Hong Kong’s storm tide could have been much. 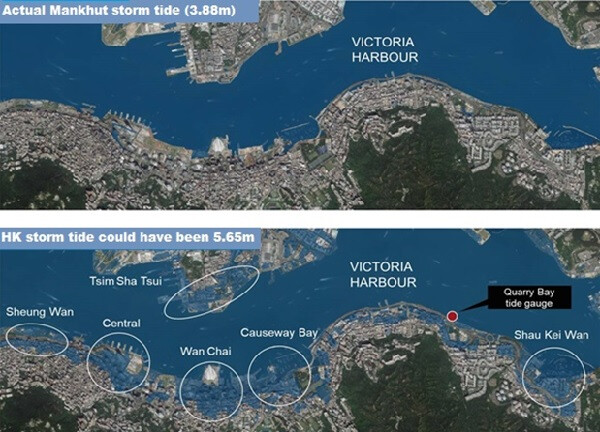 Turning to another region highly vulnerable to climate change, Schroders’ Data Insights Unit and Global Cities Team have recently undertaken an analysis of hurricane trajectories in the Atlantic. The work was part of an ongoing project to integrate climate change risk into models for evaluating urban property values. The image below shows a simulation of 100 years’ worth of hurricane paths stacked on top of each other, highlighting the clear vulnerability of Florida and North Carolina to Hurricanes. 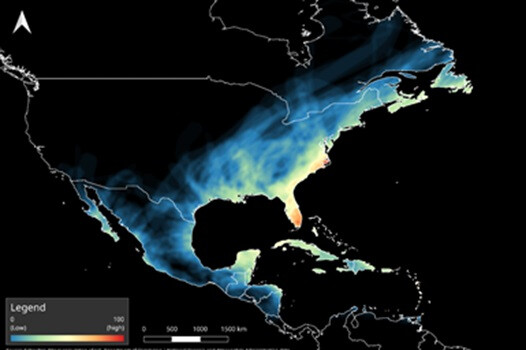 Gillian Tett, in a recent article for the Financial Times1, has also noted the vulnerability of Florida to increased flooding risk as rising sea levels and more frequent hurricanes increase the frequency and severity of property damage.

The article described the organisational barriers that exist in financial banking institutions to factoring in this information properly. This matters when flooding-related losses are expected to triple in Southern Florida over the coming decades, precisely the timeframe that corresponds to the duration of the typical new US mortgage. While the insurance industry will reprice its premiums relatively rapidly (annually) as flooding incidence and losses rise, homeowners will face rising costs to insure, assets values will come under pressure, and some may even need to be relocated/reconstructed.

Asset values often seem immune to emerging factors until a critical mass of participants recognise the new information and start factoring it into their investment decisions. At that point, there can be quite dramatic impacts on valuation. We are likely just at the beginning of a very long period in which climate change drivers have an increasing and significant effect on asset prices.