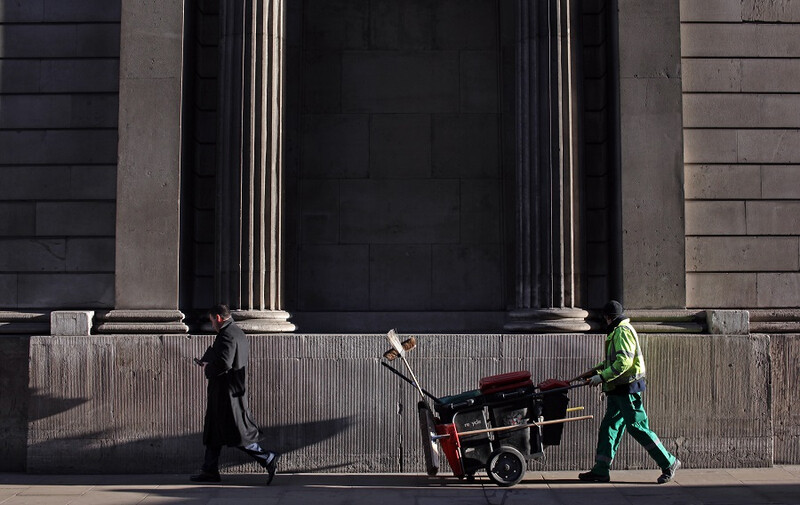 A global pandemic and the extraordinary response we saw from governments and central banks do not feature in any economic textbooks – at least, not yet. However, a contraction caused by central banks raising interest rates is very much a feature of the classic economic cycle. It has occurred regularly in modern economic history and suggests there is good reason for concern about the outlook over the coming year. As Schroders’ Chief Economist Keith Wade has noted, “the recessions of the 1980s and 1990s followed a similar pick-up in inflation to that being experienced today.”

Every cycle comes to an end at some point. Even so, the US economy did not experience a recession (defined as two consecutive quarters of declining output) for a whole decade before the pandemic. We might have hoped that this recovery – fuelled by pent-up demand and savings accumulated during lockdowns – would have gone on for longer than now looks likely.

So what has changed? It really is all about inflation. It has been exacerbated by Russia’s invasion of Ukraine, which has resulted in surging food and energy prices. But in the US, UK and some eurozone economies there are also clear signs that higher prices are becoming entrenched in the domestic economy, requiring a stronger response from central banks. Last month, the Federal Reserve opted to raise US interest rates by 0.75% – despite saying just weeks before that such an unusually large move was “not under active review”.

Is the cure worse than the disease?

Central banks can’t simply ignore high inflation. For one thing, most of them have a statutory duty to keep prices stable, with many targeting annual inflation of 2%. At today’s much higher levels, it is starting to erode both consumer spending and corporate profitability. This was evident in a recent profit warning from Walmart, the world’s largest retailer, which was attributed to lower merchandise sales as well as higher costs. In the UK, it is hard to see how discretionary spending will not suffer when it costs close to £100 to fill up a family car with petrol.

Though most developed markets’ central banks are formally independent of government, there is huge political pressure to rein in inflation. The US has mid-term elections in November and the Democrats are facing a struggle to retain control of Congress. Though President Joe Biden has talked a great deal about “Putin’s price hike”, he is clearly worried voters will punish his party for the hardship caused by high inflation.

Higher interest rates will of course also cause economic pain, but it may be more evenly distributed between “Wall Street” and “Main Street”. Owners of financial assets have suffered from the fall in both equity and bond prices. And red-hot housing markets are set to cool as mortgage rates follow the move higher in bond yields. In the US, the average interest rate on the popular 30-year fixed mortgage is now close to 6%, having started the year at just above 3%. A softer housing market could help limit rent rises that are making life difficult for younger workers and those unable to buy their own homes.

It is no surprise that markets have become much more volatile as they deal with the challenges of high inflation today and the prospect of a significant slowdown in the next year or so.

Investors are once again debating whether the economy faces a “soft” or “hard” landing. The former would see the economy and inflation cool while unemployment and credit losses remain low. In this optimistic scenario, markets could well start to recover this year’s losses. But it will be a difficult balancing act to pull off. Higher interest rates could well tip the global economy into a recession.

Much depends on the path of inflation. The latest data is not particularly encouraging. In May, “core” US consumer prices – which exclude energy and food – rose by another 0.6% month-on-month, showing no sign of slowing from the previous month. A separate survey showed consumer expectations for long-term inflation continue to increase, giving rise to concern that the US is moving towards the kind of “wage-price spiral” last seen in the 1970s.

However, inflation is very much a “lagging” indicator and takes time to respond to changes in the economy and monetary policy. There are clear signs that US activity is slowing, with inventory levels building up as unsold goods remain in the warehouse. Combined with recent interest rate rises, this should lead to a decline in inflation later in the year and allow the Fed to soften its “hawkish” stance. Global developments will also be crucial. De-escalation of the situation in Ukraine, allowing food and energy prices to fall, would be a significant help.

It is hard to argue that a hard landing is “in the price”. At the time of writing, global equities were down just over 20% (in USD terms) from their peak at the start of the year. This has taken the froth out of markets. But the MSCI All Countries World Index still trades at a relatively full 16x estimated earnings over the next 12 months. Both the multiple investors are willing to pay, and estimated earnings would likely fall if we were to head into a recession and could send share prices still lower. This underlies our more cautious stance on shares.

Valuations are back to the long-term average 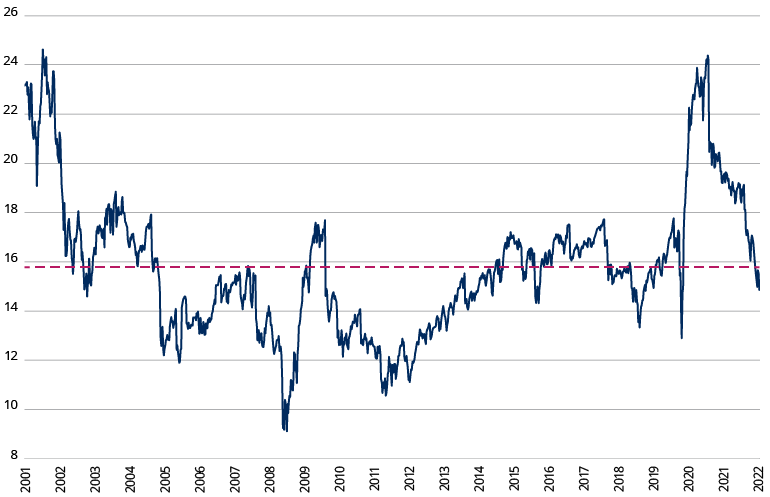 Source: Cazenove Capital, Bloomberg
Past performance is not a guide to future performance. The value of an investment and the income from it may go down as well as up and investors may not get back the amount originally invested.

Further political – and geopolitical shocks – may lie ahead

We must not forget events in Ukraine. There is a risk that the conflict triggered by Russia’s invasion escalates, either intentionally or unintentionally. However, a bigger concern may be that the conflict results in further global division. We could see China and other countries align themselves more closely with Russia as a new cold war takes shape. Even if this does not take on a military aspect, economic hostilities could have very significant consequences for global markets.

At the moment, Western leaders do not find themselves in a strong position to deal with this rapidly evolving geopolitical landscape. The cost-of-living crisis in many developed countries means that governments are far more focused on domestic challenges.