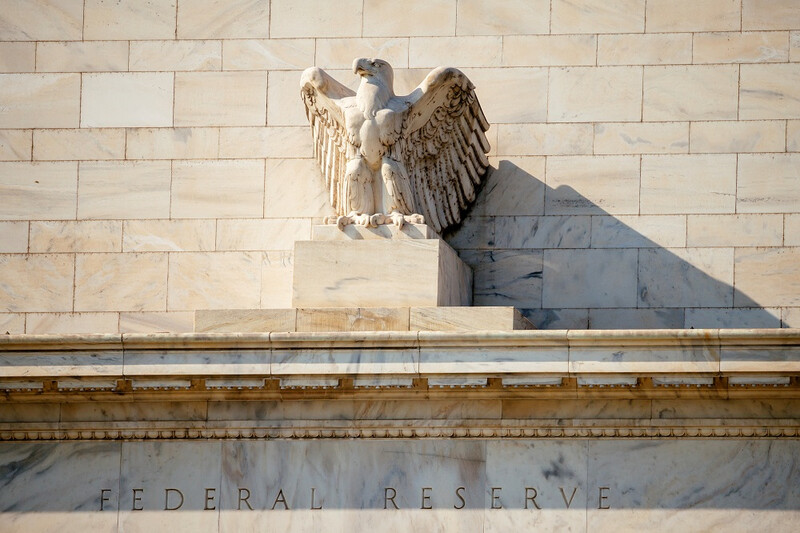 As the threat of coronavirus recedes, and the risks from inflation rise, major central banks have started raising interest rates from rock-bottom levels. This has caused bond yields around the world to rise – and bond prices to fall. As the chart below shows, yields on both government and corporate bonds have risen quickly and significantly since the start of the year. 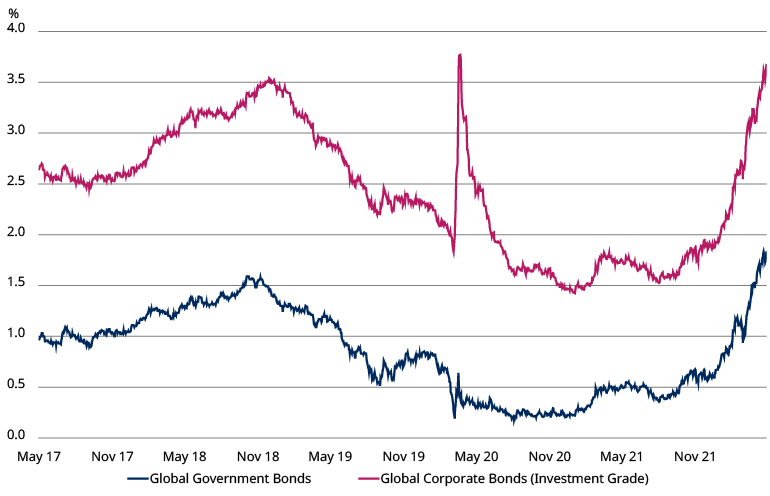 Source: Refinitiv Datastream, May 2022
Past performance is not a guide to future performance. The value of an investment and the income from it may go down as well as up and investors may not get back the amount originally invested.

Within our core, multi-asset portfolios we have been underweight fixed income for some time, helping performance this year. Given the uncertainty about where interest rates are headed, we remain cautious on fixed income overall. However, we think that recent moves have created some opportunities. Recently, we increased our exposure to developed market government bonds with short and medium maturities, as well as higher quality areas of credit in developed markets (specifically, securitised credit).

The opportunity in shorter-dated bonds…

The “front end” of the fixed income market – which is driven by expectations for central bank policy rates over the next few years – is now pricing in a succession of interest rate increases. This has been encouraged by “hawkish” comments from central bankers, suggesting that interest rates will need to rise quickly to combat inflation. For instance, two-year gilts (UK government bonds) now1 offer a yield to maturity of 1.58% – compared to just under 0.1% a year ago2.

Government bond yields could still move higher – and bond prices lower. But it is reasonable to assume that a lot of the move in interest rates is already “in the price” – especially for these shorter-dated bonds. In the UK, markets are anticipating another five interest rate hikes of 0.25% before year-end, taking the Bank of England base rate to 2.25% from its current level of 1.0%. Similarly, market pricing suggests the Federal Reserve in the United States is poised to hike interest rates by another 2.0% before the end of the year, lifting the Federal Funds rate to 2.75% - 3.00%. Even the European Central Bank, which has kept its deposit rate below zero since June 2014, is now expected to raise its deposit rate to 0.25% – from -0.5% currently – by the end of 2022.

The yields on short-term money market instruments, such as treasury bills and overnight bank deposits, do not reflect this outlook. The rates on these investments follow actual – rather than anticipated – moves in policy rates, which have yet to move meaningfully in most major markets. 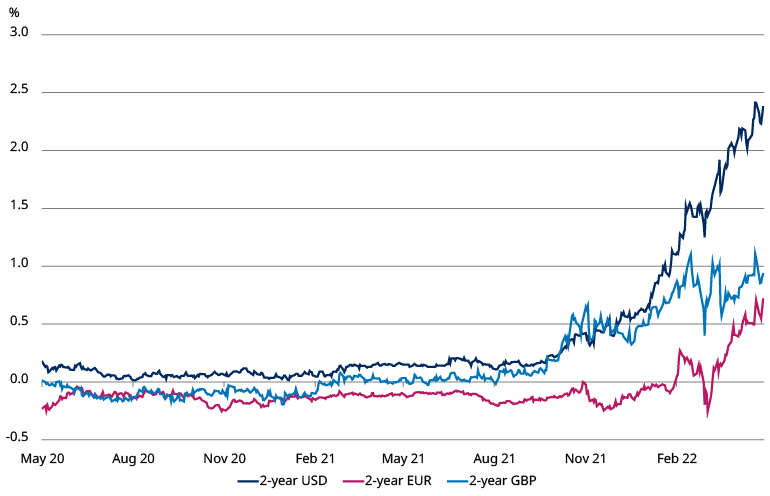 Source: Refinitiv Datastream. Note: chart shows yield on 2 year bond less overnight money market rate.
Past performance is not a guide to future performance. The value of an investment and the income from it may go down as well as up and investors may not get back the amount originally invested.

Yields on government bonds tend to peak closer to the end of the policy tightening cycle, not when central banks are just getting started. Given the uncertainty about when this cycle might end – and how high yields might climb – we remain more cautious on longer-dated bonds, as their price is much more sensitive to yield changes. This segment of the market has also seen yields rise over the last few months, but to a lesser degree than shorter-dated bonds. The yield on a 10-year gilt, for instance, is now close to 1.9%3 compared to 0.8%4 this time last year. Despite the smaller change in yield, the 10 year-bond has experienced a much greater decline in value due to its higher interest rate sensitivity. An investor who bought the benchmark 10-year gilt one year ago would have lost 7.2% in total return terms – compared to a 1.6% loss for an investor in the benchmark 2-year gilt.

Corporate bonds offer an additional yield over government bonds to compensate investors for the incremental credit risk. This “credit spread” has been increasing in recent months and the spread on short-dated sterling corporate bonds is now above long-term averages. In the context of an uncertain macroeconomic outlook, our preference is for short-dated bonds issued by corporates and financial institutions with strong balance sheets and a reasonable earnings outlook. A typical portfolio fitting this description has a yield to maturity of about 2.5% - 3% in sterling. Given the short maturity of these bonds, the price volatility of such portfolios should generally be fairly limited.

The rise in commodity prices following the invasion of Ukraine has further aggravated global inflationary pressures and pushed out the timeframe over which price levels are expected to stabilise. So while yields on fixed-income instruments are now higher than they were in nominal terms, they are still negative when adjusted for inflation. Given this negative “real” yield, alongside central banks’ hawkish stance and the risk of an inflationary overshoot, we remain cautious on fixed income overall. Our discretionary, multi-asset portfolios remain underweight the asset class.

There is also significant uncertainty about where bond yields will ultimately end up. Financial markets are now grappling with factors – including war and widespread lockdowns in China – that could push global growth and inflation well above or below expectations. This uncertainty is reflected in the anticipated volatility of US Treasuries5, which now stands at a five-year high and well above the long-term average.

Expected volatility of US Treasuries over the next six months 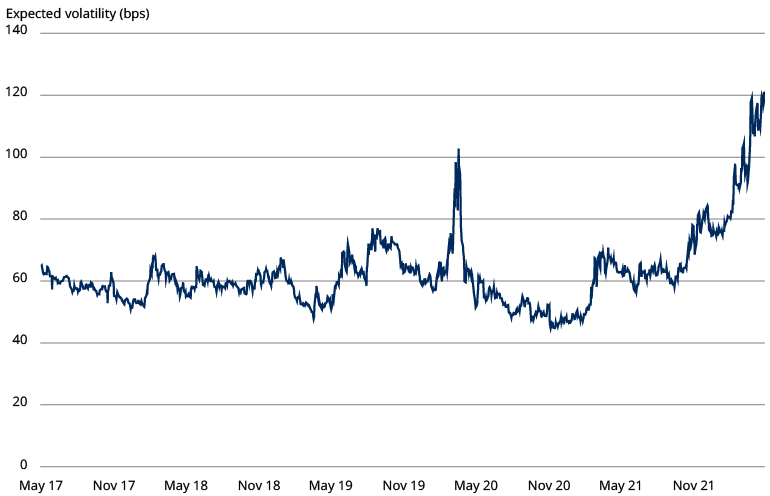 Source: Refinitiv Datastream. Note: chart shows the ICE BofA MOVE Index which tracks the expected volatility of US Treasuries over the next 6 months.

Tighter monetary policy and reduction of the size of central banks’ balance sheets will increase the overall cost of capital and provide less boost to economic activity over the coming year. And with pressure on real incomes from commodity and food price inflation, consumer demand is likely to cool. Over time, this should take some of the heat out of inflation and reduce the pressure on central banks to further raise interest rates. At this point, bond yields may peak and bond prices rally.

For now, however, a conservative approach looks appropriate. Consequently, we are focusing on short- and medium-term bonds to keep our portfolio interest rate sensitivity lower than comparative benchmarks. And within the corporate bond market, we are focusing on issuers with stronger balance sheets and the ability to defend margins in a more inflationary environment.