The escalating trade war means we have lowered our expectations for growth across the BRIC economies (Brazil, India, Russia and China) this quarter. We also see higher inflation compared to our previous forecast. This is mostly a result of a slightly stronger US dollar, and higher oil and food prices.

Source: Thomson Datastream, Schroders Economics Group. 13 August 2019. Numbers in parentheses refer to previous forecast. The forecasts (f) included should not be relied upon, are not guaranteed and are provided only as at the date of issue. Our forecasts are based on our own assumptions which may change. Forecasts and assumptions may be affected by external economic or other factors.

Usually when inflation is rising, central banks raise interest rates to keep prices in check. However, this time we think emerging market authorities will prioritise the slower growth outlook over the higher inflation outlook and lower interest rates instead in order to boost economic activity.

Our more negative assumption on the trade war has consequences for our outlook on Chinese growth. The second quarter had already disappointed relative to our forecast, and the authorities haven’t provided any economic stimulus (either through lower policy rates, increased government spending or lower taxes), so with the added headwind of tariffs in September it is inevitable that we downgrade Chinese growth for this year.

The escalation in the trade war also spells bad news for the currency; we expect that after tariffs are hiked to 25% across all Chinese exports to the US, the renminbi will weaken further, to around 7.2 to the dollar. Rising food prices had already lifted our inflation forecast and the likely depreciation of the currency will push it up even further.

Inflation is not expected to stay persistently above the 3% target though, and so should not prevent the People's Bank of China (PBoC) from lowering key rates, should the occasion demand it. We would also expect some additional support from the government, with some spending likely in the fourth quarter of 2019 and more to be announced in March 2020.

Brazil: fixing the roof before the next downpour

While we have also downgraded both 2019 and 2020 growth expectations in Brazil (following soft data, domestic travails and a weaker outlook for global growth), there is some good news. The success of the pension reform has boosted confidence and investment, helping to prompt a considerable rebound in economic conditions.

We also expect it to have a positive effect on the currency; the real should be stronger in a world where fiscal concerns have been dealt with and growth is recovering, helping to push down inflation.

The pension reform also removes a major source of uncertainty for Brazilian assets, which, in combination with the growth and inflation outlooks, has made it easier and easier for the central bank to cut interest rates. We expect more cuts to follow the most recent 50bps reduction, and significantly revise lower our expectation for policy rates. We now expect a further 75bps in cuts by the end of 2020 to 5.25%.

Though India is a much more closed economy than its BRIC counterparts, and so enjoys a degree of insulation from the trade war and slower global growth, activity in 2019 continues to disappoint. Meanwhile, the first budget of the returning Modi-led government following its victory in May's elections offered little additional support to growth. We wrote about this budget in July, noting that it disappointed expectations of pro-growth stimulus and so weighed on markets.

On the monetary policy front, further interest rate cuts seem a certainty, particularly with inflation remaining subdued. There are risks to this outlook; the recent weakness in the rupee (as in other EM currencies) and the uncertain prospect of monsoon rains. All the same, given the growth and credit backdrop, we expect further easing to come.

Russia: steady as she goes

We have made some minor downgrades to our outlook for Russian growth, reflecting a weaker second quarter this year and the softer global backdrop for 2020. We continue to believe that in the second half of this year infrastructure projects should support growth going into 2020.

As we have noted before, fiscal and monetary policy in Russia has been redesigned to reduce the sensitivity of macroeconomic variables to the oil price, including the currency. Consequently, even large swings in oil prices have only a limited impact on the outlook, compared to a few years ago. This also implies a relatively stable currency. 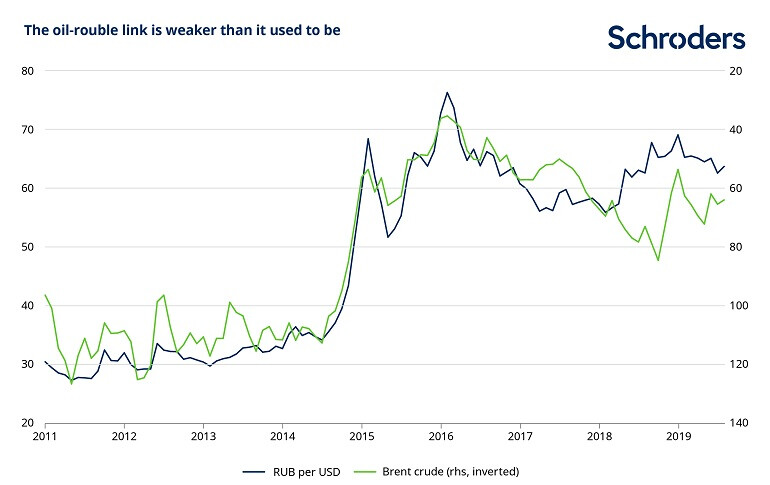 One risk arises from geopolitics. The US has imposed a second round of sanctions on Russia, this time prohibiting US banks from participating in the issuance of Russian sovereign debt. This has added to pressure on the rouble and will see more caution from the central bank.

Russia is the only economy for which we haven't changed our monetary policy forecast. The central bank appears cautious about elevated inflationary expectations and the possibility that government starts to spend more later this year, generating further inflationary pressure. Sanctions-related currency weakness will only add to these concerns.