Late last year, we identified conflict between Russia and Ukraine as a possible risk to markets in 2022. However, we did not envisage the scale of the invasion that has since taken place. It has understandably become investors’ key focus. Even if Russia and Ukraine reach an agreement that brings fighting to a halt, we expect sanctions on Russia will remain in place for the foreseeable future. As a result, at least some of the inflationary pressures arising from the conflict are likely to persist.

Equity markets initially fell sharply in response to the invasion, but the selling was not indiscriminate: as a rule of thumb, the nearer a country is geographically to the conflict, the worse it has performed. Amongst non-Russian markets, Germany and Italy have been hardest hit, reflecting their dependence on Russian energy and financial exposure. The US, which is a net exporter of both energy and agricultural commodities, has fared better on a relative basis.

European markets have come under the greatest pressure 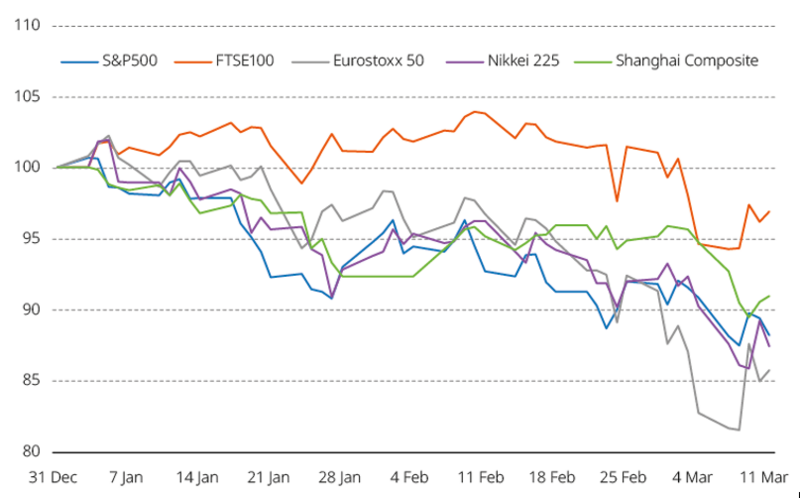 Given our concerns about inflation, we had already implemented changes to the defensive and diversifying assets within portfolios. This includes our exposure to inflation-linked government bonds and a new position in commodities, alongside our gold holding.

Changes to our equity positioning

Recent developments have now prompted us to make changes to our equity exposure. We have downgraded our view on the asset class to “neutral” from “overweight.” We have also made adjustments within our equity allocation reflecting this more cautious stance.

Heading into this crisis, we were broadly neutral in our allocation to European markets. We are now reducing this exposure, based on the view that European economies will face greater pressure from high energy prices. We are taking profits in a long-held European equity position, recycling the profits into funds more exposed to the US.

The growing risk of stagflation (rising inflation and low or negative growth) has also prompted us to increase our focus on “quality” companies that exhibit characteristics such as balance sheet strength and the ability to pass on higher costs to customers. To reflect this view, we have reduced holdings in funds specialising in small and mid-cap companies in favour of those investing at the larger end of the market.

We continue to focus on the key long-term themes that I have discussed before. In particular, the invasion of Ukraine has drawn attention to the question of energy security and is likely to add momentum to the transition towards an energy system based on renewable power. However, this will not be without near-term challenges as renewable manufacturers face headwinds from rising input costs.

We could also see technology and healthcare return to favour. As the near-term growth outlook darkens, the long-term tailwinds supporting these sectors look relatively more attractive.

The defensive and diversifying assets that we hold within multi-asset portfolios have helped us through recent volatility.

We have benefited from our government bond holdings, which tend to act as a safe haven in times of heightened uncertainty. However, they have not rallied as much as they have during previous macro-economic shocks, reflecting low starting yields, continued concern about inflation and the prospect of further interest rate increases this year.

We currently have a preference for gold and commodities alongside our holding in US inflation-linked bonds. All have performed well in recent weeks – and in previous periods of stagflation. We continue to hold them in our core strategies.