What lies ahead for stock markets after recent falls?

Frank Thormann discusses which types of companies could offer some brightness after a gloomy period for stock markets. 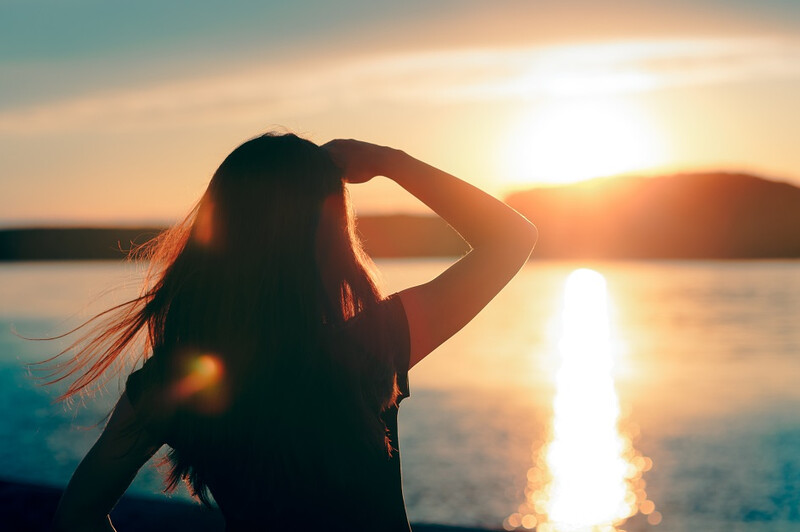 Global shares have had a difficult few weeks and have fallen particular steeply since the US Federal Reserve (Fed) raised interest rates by 50 basis points (0.50%) on 4 May.

For once, the US is performing worse than average, with its high weighting in technology and growth stocks counting against it.

As equity investors, one of our main sources of information about what’s going on comes in the form of quarterly reporting seasons. These see publicly-listed companies provide detailed explanations about what they're seeing day-to-day; what is changing and what is not changing. 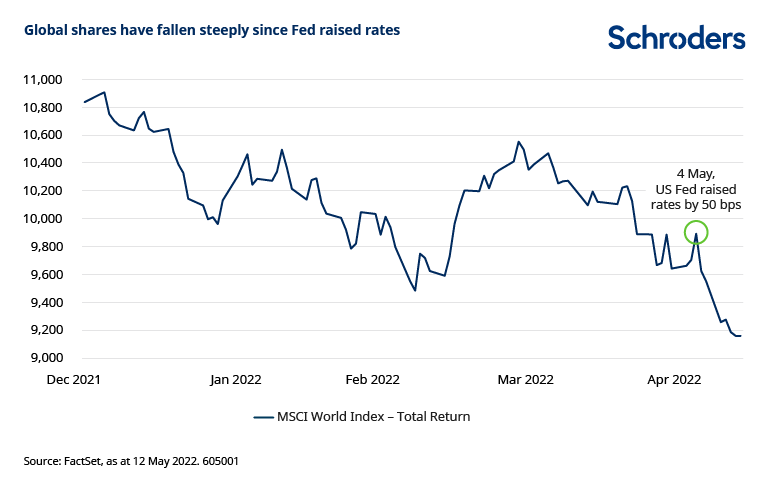 Latest earnings season positive, but clouds for some sectors

The reporting season for the first quarter has recently concluded. In fact, for the vast majority of companies, the business climate is still quite positive, showing strong revenue and earnings growth. It’s by no means been as robust as 2021, but for companies listed in the US S&P 500 stock market index, revenue and earnings have grown by a low teens percentage.

Looking ahead to the rest of the year, earnings estimates are not being revised higher but they’re also not falling dramatically. I’d say that’s a fairly strong achievement. 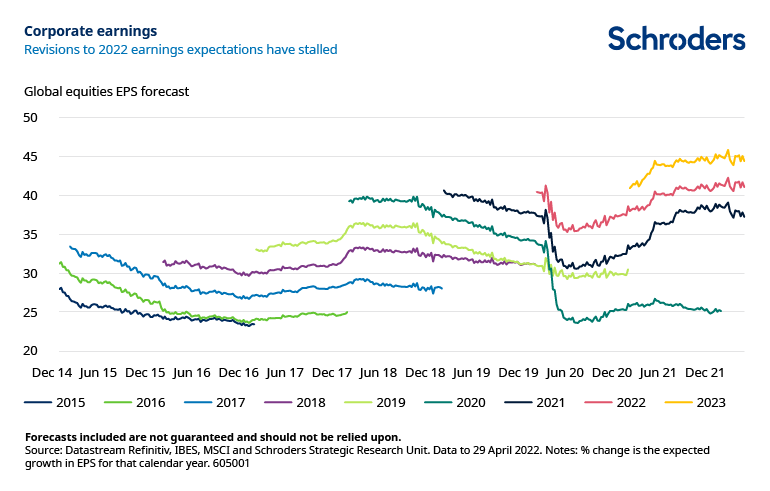 However, there are some sectors that are more challenged and where clouds are gathering on the horizon.

One sector that saw earnings declines in Q1 was financials, particularly banks. This was largely because of a jump in provisions. Provisions are funds that are set aside in anticipation of future losses. We should remember that bank losses for bad loans have been low for a very extended period, so provisions have risen from what was probably an unsustainably low level.

Another sector that’s having a difficult time is manufacturing. Anything involving making physical goods and shipping them around the world is facing a very complex situation right now. There’s a lot of cost pressure in supply chains.

Providers of “mission critical” goods or services will fare best

That cost pressure, and the ability of companies to pass on cost increases to customers, is the key element that we as stockpickers are focused on right now. In a nutshell, the source of “pricing power” – or the ability to raise prices without destroying demand – comes from having a product or service that is indispensable or mission critical.

That can be real, or it can be a matter of perception. Take PepsiCo, for example. If you go to the supermarket, you’ll find it next to own brand equivalents which cost a fraction of the price and taste more or less the same. But customers perceive PepsiCo as unique and indispensable, which allowed the firm to implement a c.8% year-on-year price increase for the North American beverage segment, while growing volumes 4% year-on-year at the same time in Q1 2022.

An example in technology in Microsoft. The Microsoft suite of tools is probably mission critical for most office workers. It's hard to see any such businesses cancelling their Microsoft contract just because Microsoft is raising prices a little bit.

Those sorts of companies are able to weather the inflationary environment really well.

A sector under great scrutiny right now is energy, given the rise in the oil price this year. We think oil prices are likely to remain relatively robust.

Another positive surprise could come in the form of capital discipline, i.e. reining in spending. That’s a concept that been pretty foreign to the energy sector in the past. However, we’re now seeing companies refrain from increasing drilling activity at any price. Instead, they’re focusing on free cash flow generation, and on returning that cash to shareholders.

That combination means energy remains a sector of interest for us.