The UK’s banks received a letter from the Bank of England (BoE) this week which has brought negative interest rates back into the headlines.

The letter, published here, asked banks how ready they would be if the Bank of England base rate – which currently sits at 0.10% - moved into negative territory.

The letter, signed by Sam Woods, Deputy Governor and CEO of the Prudential Regulation Authority, said:

“For a negative bank rate to be effective as a policy tool, the financial sector – as the key transmission mechanism of monetary policy – would need to be operationally ready to implement it in a way that does not adversely affect the safety and soundness of firms.”

The letter is not a statement of intent and the prospect of negative rates remains hypothetical – “should the MPC decide it was appropriate” – but it has brought the topic back into the spotlight.

We spoke to Azad Zangana, Senior Economist and Strategist to find out more about what this all means.

Why is the Bank of England talking about negative interest rates in the UK?

“The UK economy was growing at a relatively weak pace – then the coronavirus pandemic arrived, posing an enormous threat to the system. The Bank of England (BoE) wanted to keep money in the real economy and to kick-start spending. The intention is to get money flowing out of banks and into the economy in the form of loans and mortgages.

“Quantitative easing (QE) – the BoE buying government bonds and corporate bonds – is one way to do this. And cutting interest rates is another. As interest rates are now only 0.10%, cutting much further would lead to negative interest rates.

“If interest rates are cut so far that they fall below zero, the theory should still apply - negative rates should encourage borrowing and discourage deposits and savings. But, in practice, negative interest rates can result in some bizarre outcomes – for savers and mortgage holders.” 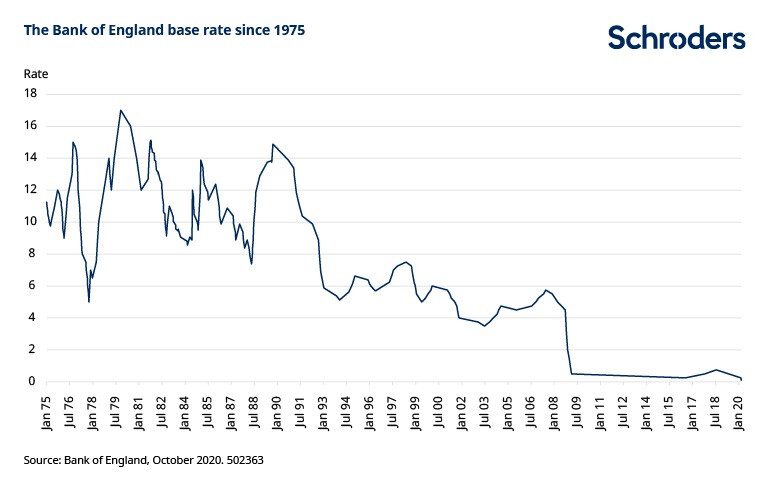 Has this negative interest policy actually worked in other countries – has it boosted their economies and increased lending?

“The evidence from Europe does not really suggest that negative interest rates encouraged greater lending activity.  In fact, lending was stagnant until the European Central Bank started its own funding for lending scheme.

“If banks are charged for holding cash reserves with the central bank, rather than being paid, then it eats into their profit margin and requires them to recoup the cost in some way.

“In theory, banks should pass on the cost to savers by giving them a negative interest rate. In reality, where negative interest rates exist, banks have been reluctant to do this, choosing instead to either increase banking fees or charges. If they cannot do this, then some banks have simply reduced lending, which may be the worst possible outcome given the policy’s intention is to stimulate business activity.”

What about my mortgage? If I have a negative mortgage interest rate, would my bank actually pay me to borrow?

“Yes. It sounds crazy, but it’s true. In this topsy-turvy scenario, the lender would actually pay the borrower. In some European countries, where central bank rates have been below zero for several years, mortgages at sub-zero rates – or “reverse-charging” – are no longer so unfamiliar. Put another way, if your mortgage comes with a negative interest rate, you’ll end up paying back less than you borrowed.

“Where this happens, the bank doesn’t actually make monthly payments to the borrower. Instead, the bank reduces the outstanding capital, thereby accelerating how fast the borrowers reduce their debt. Clearly, where interest rates are negative, there is little incentive for the mortgage borrower to repay debt.”

Why would a lender pay someone who is borrowing money from them?

“Are you wondering, what does the lender get out of this arrangement? Well, in the world of negative interest rates, a negative return may still look attractive when compared to other returns the bank could receive on its capital. It also depends on other factors (rather than just the interest rate). This might include the security of the underlying asset (such as property) and the size of the “return” (loss).

“In this sense a mortgage is just like a government bond producing a negative yield. In 2019, for example, a Danish bank offered a ten-year mortgage at –0.5%. Compared to other potential returns it could get on its cash, it must have viewed this as an attractive opportunity.”

“It seems highly unlikely. After the 2008-2009 financial crisis, some UK “tracker” mortgages – the interest rate the borrower pays for the loan rises and falls in line with the Bank of England’s rate – did indeed come close to zero. The BoE rate fell by 90%, going from 5% to 0.5% in under a year. UK banks learned from that experience.

“Most tracker mortgage contracts currently in force have a mechanism in place which prevents them from dropping below a stated positive interest rate, irrespective of whether or not the BoE cuts its rate. In any case, a high proportion of UK mortgages are on fixed rates, so BoE rate reductions would not apply to those borrowers’ loans.”

If I am a UK saver, would I have to pay my bank to look after my money?

“Negative interest rates penalise consumers and businesses for keeping savings in their bank accounts, as their value would decrease over time. To avoid charges, some households could even decide to withdraw savings from banks and instead invest in a home safe. Not only is this a security risk, but the withdrawal of assets from financial institutions reduces liquidity and the ability of banks to lend.

“Banks would not pay out anything to consumers, who receive zero on their savings, but in the main, investors do not have to pay the banks to hold onto the money for them. Negative interest rates have actually already been put in place in the eurozone, Japan, Switzerland, Sweden and Denmark. And that is what has happened to consumers and businesses in those countries.

“However, savers in Germany are among those experiencing negative rates on deposits but, so far, the majority of those affected are institutions or individual savers with large sums such as €100,000 or more. What savers have to pay for the bank to actually hold their money is sometimes called “depositary charges”. Only recently have smaller German savers been hit by such charges.”

What could happen to bond markets if the UK has negative interest rates?

“An interest rate cut into negative territory could boost UK bond markets. This is because when yields fall, bond prices actually rise. However, lower yields also decrease any future income that would accrue to bond holders.

“Growing expectations for interest rate cuts have already sent UK yields on government bonds below zero for the first time last month. This means they were effectively paying the UK government to hold their money.”

What could be the impact on stock markets?

“Lower interest rates could be positive for the UK stock market because they increase the value of future earnings that companies make that would eventually be paid out to shareholders. Companies’ earnings become more valuable in a low interest rate environment. When this happens, share prices tend to appreciate in value.”

What could the BoE do instead of moving to negative interest rates?

“Although we do not expect to see negative interest rates in the UK, if this did actually happen, it could have a number of far-reaching consequences for consumers, businesses and banks as well as the economy. We actually doubt the BoE will cut interest rates below zero. Instead, further expansions in QE are possible, with the BoE continuing to indicate that interest rates will remain on hold for some time.

“In terms of what could happen next, to support the economy, the BoE could continue to buy more bonds. This can lower borrowing costs and encourage lending without moving the base rate into negative territory.”