The way that we use and produce energy urgently needs to change. 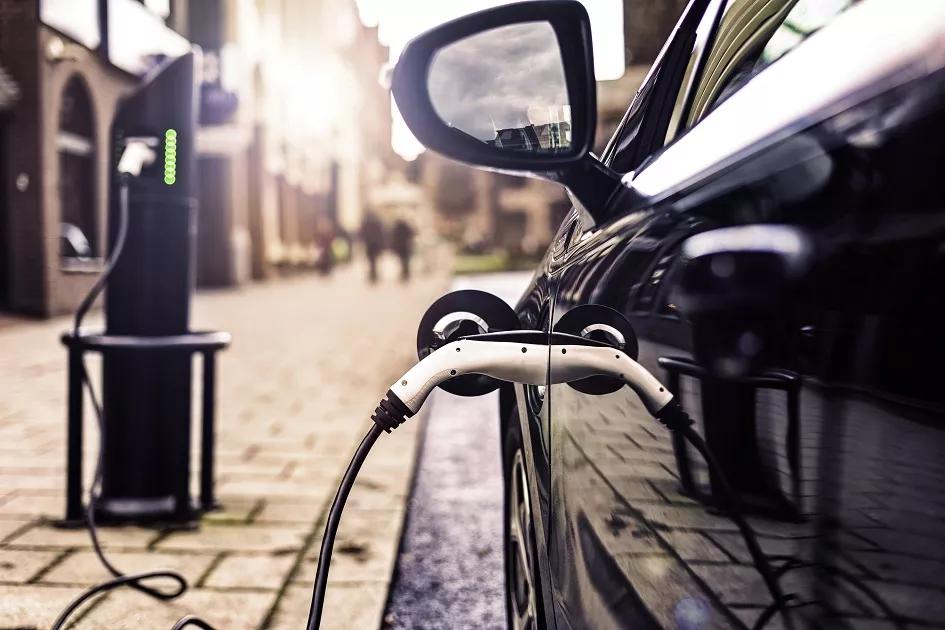 Just over a year has passed since the COP26 climate summit in Glasgow, which led to high-profile carbon-reduction commitments from countries around the world. This year's summit - COP27 - included welcome progress on helping poorer countries hit by climate disasters, but will have little impact on further reducing emissions.

Much has changed in the intervening twelve months, making the challenge of limiting the rise in global temperatures even greater. Just months after the event in Glasgow, Russia invaded Ukraine, leading to huge disruption in global energy markets. Despite the agreement at COP26 to reduce the use of coal, the most carbon-intensive source of energy, global demand is set to return to an all-time high in 2022, according to an estimate from the International Energy Agency (“IEA”).

The importance of energy 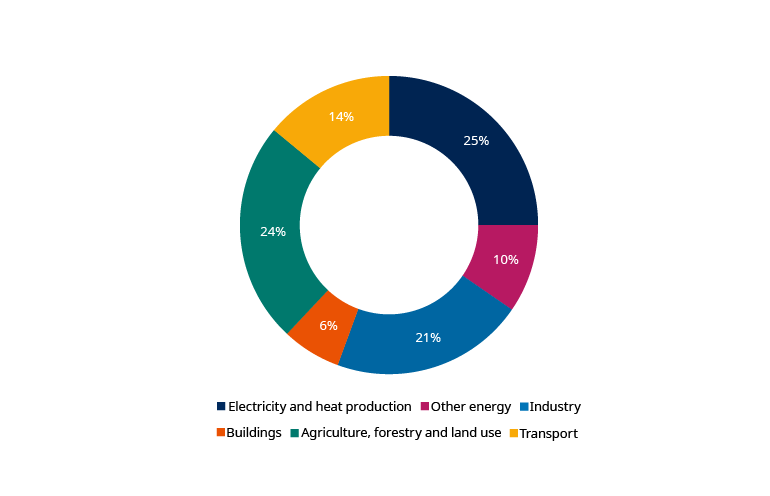 In its different forms, the use and production of energy accounts for 75% of global CO2 emissions. So reducing the emissions associated with it is an essential part of our response to the climate crisis. Policymakers are now taking decisive action – especially in Europe, which must grapple with the additional challenge of reducing its dependence on Russian oil and gas.

In the Eurozone, the RePower EU plan sets out a path to source far more of its energy from renewables. In the US, the Inflation Reduction Act was passed in August, bringing in more support for renewables and hydrogen, battery storage initiatives and incentives for electric vehicles. And in China, Xi Jinping has reiterated his commitment to renewables.

There has been an assumption that energy transition is something entirely new. In reality, these large-scale energy shifts have happened several times before – in the 1800s, the world transitioned from wood to coal, and then later from coal to oil and gas. The key difference with this energy transition is that the “pie” also has to grow – and quickly. Energy usage is set to grow threefold as the global population approaches 10 billion by 2050. There is increasing recognition that this can only be done by harnessing the world’s resources in a much more sustainable way.

Not the first energy transition 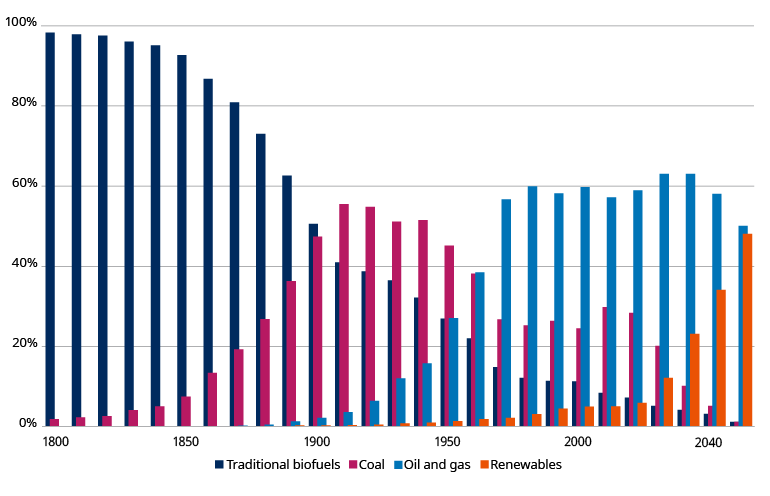 Different parts of the energy system are decarbonising at a very different pace. Overall, electricity and heat production account for the largest share of energy-related emissions (see top chart) – but progress has been far faster in the former than the latter.

The cost of renewables has dropped significantly as manufacturers benefit from economies of scale. Energy from these sources is now cheaper than oil, gas or coal - even in India and China where coal is still the primary form of energy. Over time, this is likely to drive a shift in those countries (including China, India, Japan and the US) that did not agree to the international pledges on coal at COP26. These called for OECD countries to phase out coal use by 2030 and non-OECD countries by 2040.

The key challenge for renewables still comes from energy storage. Countries will still need alternative sources of energy for times when the wind doesn’t blow or the sun doesn’t shine. Liquified natural gas (LNG) is being used as a bridging fuel until battery distribution improves or green hydrogen is more widely deployed.

Progress has been slower in heating, which is still very much dependent on fossil fuels. However, heat pump technology is now readily available and has strong environmental credentials. A heat pump running on green electricity can reduce heating emissions by more than 90% compared to a gas boiler.

Some of the easier wins in the battle to decarbonise are coming in the transportation sector. The switch from internal combustion engine (ICE) cars to electric vehicles (EVs) now looks relatively straightforward: there is no need to retrain drivers and existing manufacturers are quickly developing their EV offerings. Today, 30% of new car sales in Europe are electric. Adoption is being supported by EV-friendly policies across the world. In the UK, for example, it won’t be possible to buy a new non-electric car from 2030. Below, we share the thoughts of a fund manager we work with on accessing opportunities in EVs.

Electrifying the transport system would reduce oil demand significantly, given that around 65% of oil consumption is from transportation. However, electrification is not the answer for all sectors – even within transportation.

The role of hydrogen

This takes us to hydrogen. It is increasingly being favoured as an option to decarbonise “tough” sectors, such as cement and steel manufacturing, or aviation and shipping. Both the EU and US have put significant incentives in place for hydrogen development. This should finally bring the economies of scale needed to push prices lower.

Traditionally, hydrogen has been produced for use in agriculture. It was expensive to manufacture and the process required significant (fossil fuel) energy. However, the cost of “green” hydrogen, which is produced using water and renewable energy, continues to fall and there is significant investment going into production. It can be stored as a gas and converted into electricity using fuel cells, which are already being used in transportation. It can also be compressed and used to generate the high temperatures needed for industrial processes – such as steel and cement manufacturing. 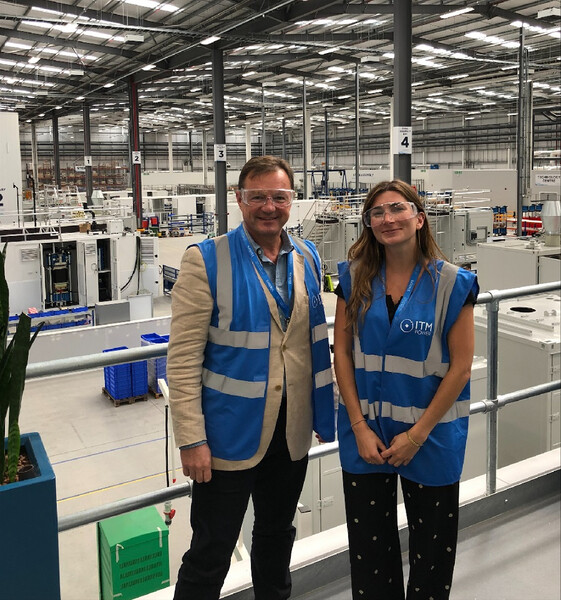 I recently visited a hydrogen technology plant run by ITM Power. Hydrogen is often thought of as a risky and complex technology but my site visit helped to debunk that. I saw firsthand how water is run through an electrolyser and split into its constituent parts (hydrogen and oxygen) using green electricity. A fuel cell (essentially the reverse of an electrolyser) can then convert hydrogen back into clean energy, with water as a by-product. This could be transformative in many areas of transport and industry – instead of toxic emissions, these processes would produce water! ITM Power is one of the world’s largest manufacturers of electrolysers.

Investments associated with the energy transition have underperformed in 2022 as fossil fuel prices have soared. This follows periods of much stronger performance in 2020 and 2021. It is consistent with our view that sustainable investments will experience periods of both outperformance and underperformance compared to the broader market.

We believe that the energy transition is still a hugely attractive investment theme, offering a strong pathway of growth ahead.