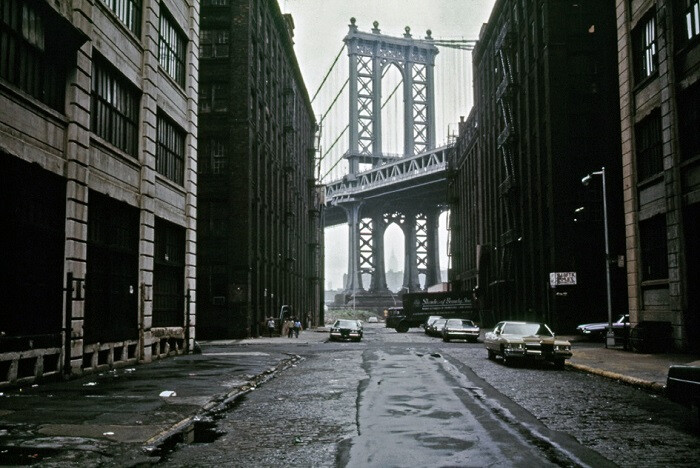 The end of the pandemic was supposed to usher in another “roaring 20s.” Instead, it is a gloomier decade from the twentieth century that is being called to mind: the 1970s. The global economy is once again grappling with acute shortages of critical commodities, largely (though not entirely) a result of Russia’s invasion of Ukraine. And again, policymakers must face the challenge of steep rises in prices across the economy. This is leading to growing concern that we may be heading for a replay of the 1970s, when inflation and unemployment both soared and real economic growth stagnated.

The commodity connection makes the parallels with the 1970s particularly striking. Then, as today, military conflict triggered a surge in oil prices that added fresh momentum to inflationary pressures that had been building for several years. In 1973, Egypt and Syria launched a surprise attack on Israel - the Yom Kippur war. In response to US support for Israel, Saudi Arabia and other oil exporters unleashed “the oil weapon.” This included a ban on oil exports to the US and a series of production cuts intended to increase competition for oil and fragment the unity of Western nations. Oil prices almost tripled. As the world started to recover from this shock, the Iranian revolution and Iraq-Iran war of 1979-1980 led to another surge in energy prices.

US inflation stood at around 6% at the start of the decade – a little lower than it is today. The oil price spikes caused it to climb to 12% in 1974 and 14% in 1980. The economy experienced a “wage-price spiral:” wages increased in line with inflation, companies raised prices to cover their higher costs, life became even more expensive…and another round of pay increases ensued. However, the cycle involved friction and hardship along the way. Wage rises often lagged increases in the cost of living and some groups were left behind; in the UK, for instance, the government capped public sector pay rises and called on the private sector not to increase pay (echoed in Bank of England governor Andrew Bailey's recent call for pay "restraint"). Consumer confidence plunged and many businesses struggled. While high inflation tends to be associated with strong labour markets, the 1970s bucked the trend and unemployment rose sharply. In the US, it almost tripled to 9% by the middle of the decade.

This made tackling inflation challenging for policymakers, who feared raising interest rates aggressively at a time of rising unemployment. However, other measures to bring prices under control met with little success. Nixon introduced a 90-day freeze on prices and wages in 1971, helping to cool inflation for a while and secure a landslide Republican victory in the 1972 presidential election. But the policy backfired, artificially boosting demand and making it even harder to keep prices under control. Central banks eventually got a grip on rising prices at the end of the decade – but only by increasing interest rates to very high levels and triggering a recession.

How did investors fare?

Stock markets around the world were volatile in the 1970s. The S&P500 fell almost 40% during a bear market that lasted for most of 1973 and 1974, before rebounding over the next five years. The UK fared even worse, with the FTSE All Share losing more than 70%.

Inflation is normally a longer-term worry for investors – but it reached such high levels in the 1970s that returns were eroded in a relatively short time frame. On an inflation-adjusted basis, and including dividends, large-cap US stocks lost 1.4% per year during the decade, according to data from business school NYU Stern. This is far cry from the returns investors have enjoyed more recently. Over the past decade, the comparable return has been 14.0%; over the past twenty years it has been 7.0%.

Profits actually grew in nominal terms by 9% annually during the 1970s. However, fearing that the economic malaise would never end, the multiple that investors were willing to pay for those earnings roughly halved, with the S&P500 ending the decade on a PE ratio of just 7.5.

T-bills and government bonds also delivered negative real returns over the decade (-1.0% and -1.8% respectively) but in an age of deep pessimism, they may have been the preferred option for many investors.

Traditional investments therefore performed poorly in the 1970s. Investors who diversified into “real assets” achieved much better returns. The star performer of the period was gold, which increased in value almost seven-fold – and that’s after adjusting for inflation. Other commodities – such as oil and wheat – also performed strongly.

What does it mean for investors today?

Chris Lewis, Investment Director at Cazenove Capital, says: “We do not expect to see a repeat of the inflation we saw in the 1970s, though we could once again be facing a period of stagflation – a combination of high inflation and low or slowing growth. The economic history of the period can therefore provide valuable insights.

Some asset classes and sectors look better positioned than others in a stagflationary environment. Commodities have tended to perform well during previous episodes of stagflation - and we increased our exposure late last year. We continue to hold gold and inflation-linked bonds. We are also tilting our equity exposure towards higher-quality companies with strong balance sheets and the ability to pass on higher costs to customers. Historically, these companies outperformed broader equity markets.

We may be nearing a peak in inflation in the US, though this could be further off for the UK and Europe given their closer proximity to developments in Ukraine. Over the medium term, we expect inflationary pressures to ease from current levels as supply chains improve and higher interest rates reduce demand. At the same time, we would not be surprised to see inflation remain persistently above pre-pandemic levels.” 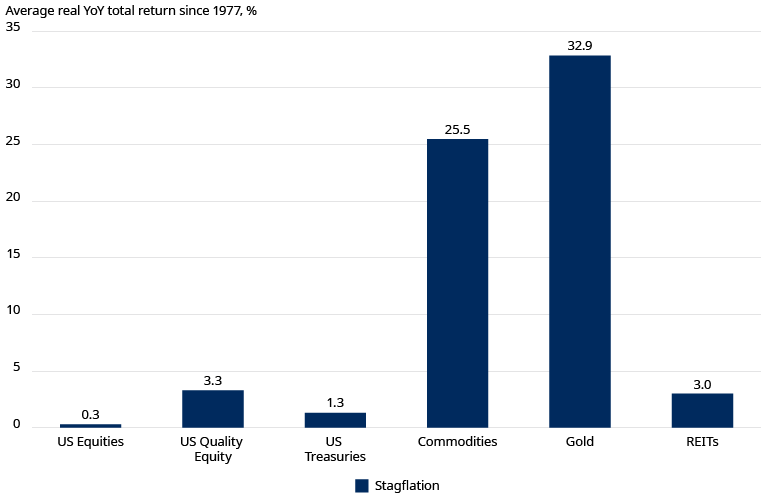 Past performance is not a guide to future returns.

Rhyming but not repeating

The similarities with the 1970s are striking. However, there are important differences to bear in mind. For one thing, central bankers are very familiar with the economic history of the period and are now taking the threat of inflation seriously. This was not the case when inflation started to rise at the end of the 1960s: “Inflation came to be widely viewed as a temporary phenomenon – or, provided it remained mild, as an acceptable condition. Full employment had become the nation’s major economic goal.” said Arthur Burns, Fed Chair from 1970 – 1978, looking back on the late sixties.

There are a number of other factors suggesting that the global economy should be able to avoid a replay of the 1970s.

At least some of the inflationary pressure we have experienced over the past year is explained by the pandemic. It resulted in a shift in demand in favour of goods over services and a rush of pent-up demand as economies reopened. Both factors strained supply chains. China’s draconian measures against its latest wave of Covid could cause further disruptions – but the inflationary pressures arising from the pandemic should eventually dissipate.

Lockdowns, working from home and the strong performance of markets over the past two years have also allowed many people to build up their savings. This has put consumers in a much stronger position to absorb higher prices.

Keith Wade, Schroders’ chief economist, says: “Households have a cushion to absorb the impact of higher costs with the excess savings built up during the pandemic, which we estimate at around $2 trillion in the US and a similar figure in Europe. We think that the consumer is likely to be the mainstay of economic growth in 2022.”

Today’s labour markets look less conducive to the kind of wage-price spiral we saw in the 1970s. One key difference is much lower levels of unionisation. In the US, just under 30% of workers belonged to a union in 1970. Today, it is closer to 10%. In the UK, the number of unionised workers has fallen from around half of the labour force to a quarter. As a result, wages are now less likely to automatically move in line with prices.

Technology is another factor that has weakened workers’ bargaining power. It is much easier for companies to outsource or offshore work. Rapid advances in robotics and artificial intelligence also mean that automation is a greater threat to many industries than ever before.

Wages are more market-driven than they were in the 1970s 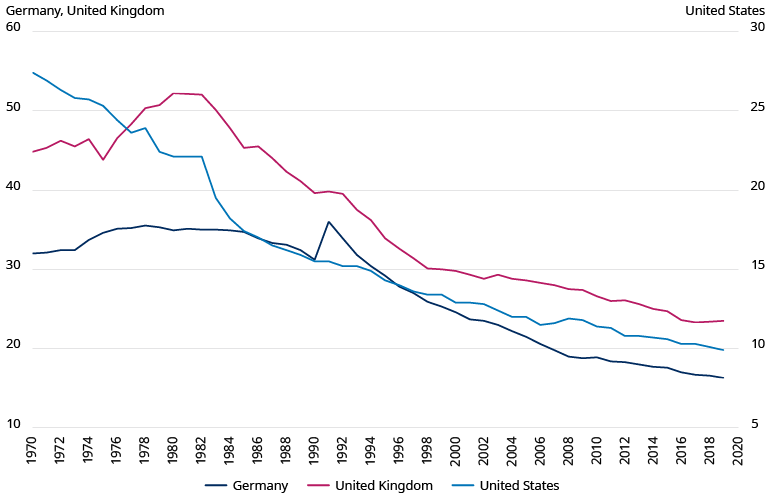 Oil prices more than tripled in both 1973 and 1979. The rise of roughly 50% since the invasion of Ukraine looks modest in comparison. Having said that, some countries – such as Germany – face greater pressure as a result of a bigger rise in domestic gas prices. And there may yet be worse to come for global energy markets; Putin could still turn to the 1970s playbook and use energy as a strategic weapon against the West. This would trigger a frenzied scramble for alternative supplies, with some commodity traders suggesting oil could reach $200 per barrel.

The good news is that the global economy is much less energy-intensive than it used to be. In 1973, the world used just under one barrel of oil to produce $1,000 of GDP based on 2015 prices, according to Columbia University’s Center on Global Energy Policy. By 2019, the global economy needed just 0.43 barrels —a 56% decline. This reflects changes in how we generate power, changing consumption patterns and technological developments. So even if oil prices do spike again, there should be less of an enduring economic impact.