Most people are aware that we are all living longer. However, you have to remember that the figures often quoted, such as those above, are averages. Some people will live longer, others less. What is less well appreciated is that we all have a pretty good chance of living longer than these averages – a lot longer if you are healthier or wealthier than average.

For example, a 60-year old man now has a 1-in-4 chance of living to 93 and a 1-in-10 chance of reaching 98. Your parents may have bid farewell before clocking 80 but you have a pretty good chance of getting close to 100.

Younger people have even stronger odds. My 2-year old daughter, for example, has an almost 30% chance of living to 100.

The chart below shows how life expectancy varies by age for males – it’s a similar picture for females but all lines are shifted up slightly. 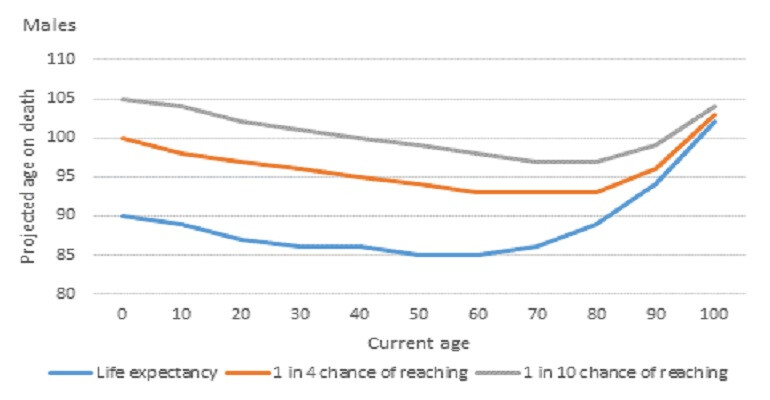 The observant reader will notice that, once you get into your 90s, your chances of living longer increase pretty sharply – if you live that long you’ve outlived lots of your peers and must be made of strong stuff, so your chances of keeping going a bit longer pick up.

So what does this mean? It means your money has to last a lot longer than you might be thinking.

For a long time, retirement savers have been encouraged to reduce exposure to riskier assets once they enter retirement and move into safer defensive assets, like government bonds. However, such an overly cautious approach will increase the chances that your money runs out while you are still alive.

For many investors, the only way they will have a chance that their money lasts long enough will be by maintaining some exposure to riskier investments, like the stock market, for longer. This will introduce additional variability in the value of a retirement savings account, which may make savers feel uncomfortable at times.

However, risk can be mitigated by spreading investments across a number of asset classes. The alternative, an increased likelihood of outliving one’s savings, is even less palatable.

Perhaps counterintuitively, while excessive risk is dangerous, excessive caution is no better.