Covid restrictions tip the eurozone back into recession

The preliminary estimate for first quarter 2021 eurozone real GDP growth was -0.6% compared to -0.7% in the final quarter of 2020. This puts the aggregate eurozone economy back into a technical recession. Compared to a year earlier, growth is down 1.8%, which is an improvement from the -4.9% year-on-year reading last quarter.

On the whole, given Covid-19 related restrictions, a contraction was widely expected. Interestingly however, outperformance from some member states helped the eurozone aggregate beat consensus expectations for -0.8% GDP growth.

Of those that have reported so far, Belgium was the best performing economy, growing by 0.6% quarter-on-quarter (q/q), followed by France with 0.4% q/q and Austria with 0.2% q/q growth. Germany saw the biggest hit, contracting by 1.7%, while Spain and Italy posted more modest contractions of -0.5% and -0.4% respectively. 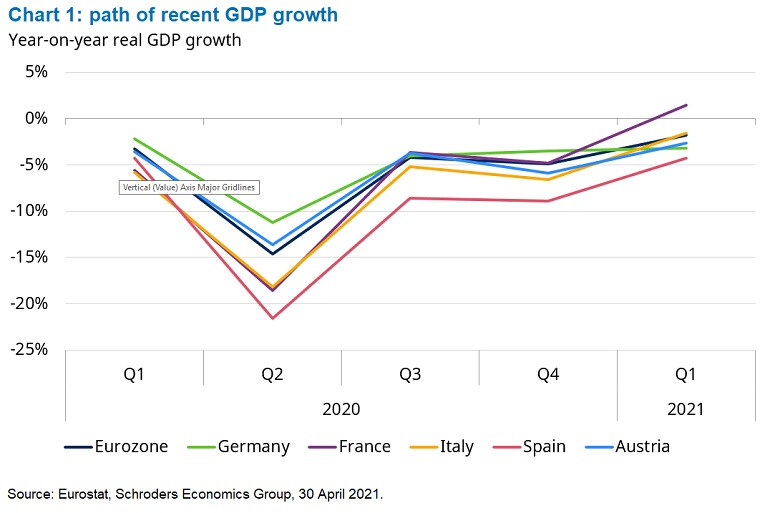 Positive growth in France suggest less restrictive measures, and/or a less observant population, as a clear third wave of the virus has spread during April. According to Our World in Data, confirmed cases per million of the population using a seven-day average peaked at 670 on 17 April, and have since fallen back to 385. This is roughly double the infection rate of Italy, Spain and Germany.

Looking ahead, though restrictions have been extended well into the second quarter, better news on the vaccinations front offers hope that a tepid recovery should already be underway. Assuming restrictions are lifted soon, growth should gather much more momentum in the third quarter of the year.

As the chart below shows, the seven-day average of daily vaccines doses administered as a share of the population in major member states is quickly catching up with the UK – often seen as the benchmark for excellent distribution. 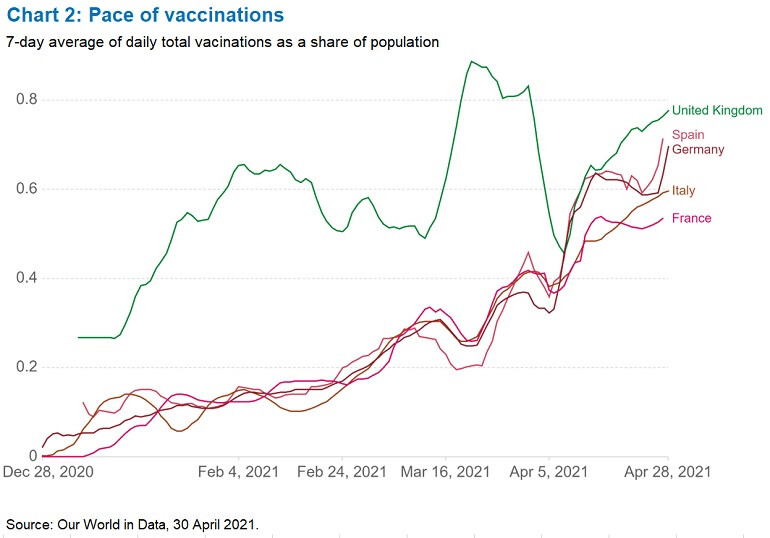 France has the additional challenge of persuading a more sceptical population of the benefits of vaccines. Compared to a few months ago, however, it seems more likely than not that the eurozone should reach herd immunity before next winter, and therefore avoid any further major shutdowns.