Can the UK economy turn a corner?

The economy has been on the verge of recession recently. Whether it improves as Brexit uncertainty lifts largely depends on the UK government's approach to negotiations with the EU and the progress it makes. If it can avoid headlines about looming tariffs, then business confidence and investment can recover.

During the current transition period, the economic relationship between the EU and UK is largely the same as before but the UK will no longer take part in the political processes of the EU. Both sides will negotiate the rules and parameters of the future relationship, including trade.

2019 was a torrid year for the UK as the economy and investors struggled with the high degree of uncertainty generated by political deadlock on Brexit. With best efforts being made to prepare for the worst possible outcome, the risk of a sudden stop to trade and possible shortages of goods was a real danger. It still is.

In the absence of a trade agreement or an extension to the transition deal, the UK could be facing the same no-deal or cliff-edge Brexit at the start of 2021.

Talks on the future relationship will begin in spring. They will start by considering issues such as:

Once these issues have been resolved, talks can become more granular.

At this stage, we expect the UK government to pursue a sector-by-sector approach to negotiations, rather than an all encompassing deal. This is because the EU will not want the final outcome to resemble full single market access if the UK is not willing to agree to the free movement of people.

Moreover, full membership of the customs union is impossible if the UK wants to pursue independent trade deals.

Which sectors are the UK’s priorities?

The UK is likely to prioritise manufacturing sectors, in particular, the auto industry, chemicals and machinery. Trade in services is likely to be excluded, partly due to the complexity and lack of available time.

Where the UK is less likely to achieve a complete deal is for the trade in agricultural products. Not because the trade in dairy and livestock is complicated, but because it competes with other member states, in particular France. Some of the highest external tariffs that the EU places are on agricultural goods, for example, 45% on dairy products, or 21% on beverages and tobacco.

A sectoral approach, rather than “all-or-nothing”, may reduce the risk of a no-deal outcome at the end of the transition period. The UK government could claim a victory, even if some sectors are excluded in order to meet the deadline.

Sectors that are excluded are likely to face tariffs, but they may be compensated by the government. The UK might push for a new transition agreement for these sectors to limit the impact on businesses, with a view of agreeing a "phase-two" deal to cover them. Phased trade deals are all the rage at the moment.

Meanwhile, the UK can start negotiating its own trade deals, although these cannot come into effect until after it leaves the EU's customs union. The government is already working on replacing many of the existing EU trade deals with third parties that will soon lapse.

Brexit-related political uncertainty weighed heavily on the UK economy in 2019. Business investment shrank through most of the year amid concerns over the risk of disruption to trade, while even households curbed their spending. With Brexit now certain and a trade negotiation underway shortly, could we see a rebound in activity?

There have been some positive signs. The flash Markit purchasing managers' indices (PMIs) for January showed a notable jump. The PMIs survey companies in the manufacturing and services sector to gauge activity in the economy. 50 is the level that separates expansion from contraction.

The manufacturing PMI rose, albeit still remaining below the neutral 50 level. Encouragingly, the new orders indicator returned to positive territory. The services PMI also improved, with both the business activity and new business indicators leaping to their highest levels since September 2018. 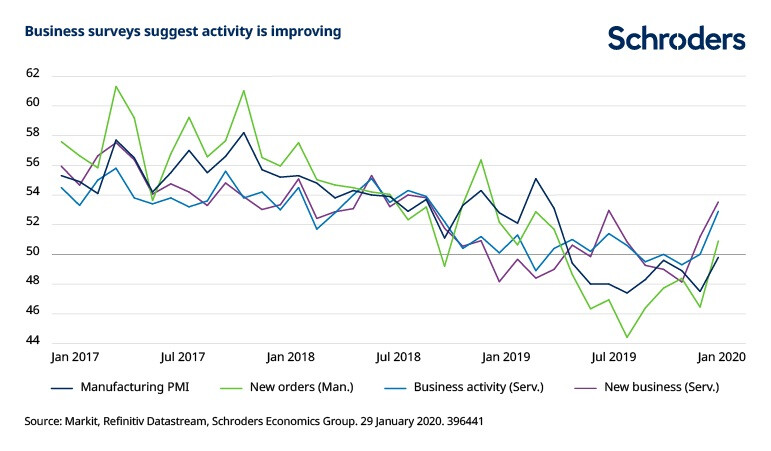 While these signs of a rebound in activity are positive, it will take some time for the official data to catch up. A significant handicap in the short-term is the build-up of inventories (or stockpiles) which took place last year to protect against a no-deal Brexit outcome. Inventory levels are now being reduced but they still remain high. This means the recovery in production and output could be delayed while inventories are run down.

This suggests GDP may not rebound much before the second half of the year. However, once it does, the UK should enjoy above average growth through at least 2021.

However, the recovery will depend on the UK government's ability to make progress in trade negotiations, and equally as important, avoid brinkmanship in negotiations. If businesses see headlines about World Trade Organisation (WTO) tariffs looming, then currency volatility will return, and businesses will retrench.